Penalty shoot-outs: the long and the short of it

Published: Monday 9 February 2015, 10.00CET
If Atlético's 16-penalty shoot-out against PSV Eindhoven has whetted your appetite, join UEFA.com as we celebrates the pleasures and pains of penalties: tension guaranteed.
by Paul Saffer Penalty shoot-outs: the long and the short of it

If Atlético's 16-penalty shoot-out against PSV Eindhoven has whetted your appetite, join UEFA.com as we celebrates the pleasures and pains of penalties: tension guaranteed.
Read more

Atlético's 16-penalty shoot-out against PSV Eindhoven was an epic, but amazingly, it was nowhere near the longest in Europe. UEFA.com celebrates the pleasures and pains of penalties.

Origin
• FIFA adopted the shoot-out on 27 June 1970, proposed by Israel Football Association (IFA) president Michael Almog after watching his nation lose a 1968 Olympic quarter-final on the drawing of lots.

First
• The first shoot-out in UEFA competition came on 30 September 1970 when Budapest Honvéd beat Aberdeen 5-4 in the European Cup Winners' Cup first round.

• That November, Everton eliminated Borussia Mönchengladbach 4-3 by the same method in the European Champion Clubs' Cup second round.

Finals
• Czechoslovakia overcame West Germany 5-3 with Antonín Panenka's famous chip to win the 1976 UEFA European Championship, the only time the final has gone to penalties. The now defunct golden goal rule was used in 1996 and 2000.

Czech prowess
• Czechoslovakia, in total, took 14 penalties in major shoot-outs and, scored them all, following up the 1976 European final with a 9-8 defeat of Italy for third place in 1980.

• The Czech Republic have picked up where they left off, converting all six to beat France in the 1996 semi-finals, the only shoot-out they have participated in since the split from Slovakia. 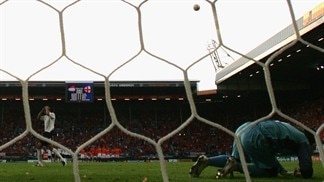 Epics
• The 2007 UEFA European Under-21 Championship semi-final penalty competition between the Netherlands and England lasted 32 attempts before the Dutch hosts prevailed 13-12 in the longest shoot-out in any UEFA competition. Coincidentally, the two players that missed in England's first senior shoot-out – the 1990 FIFA World Cup semi against West Germany – were in Heerenveen, Stuart Pearce managing the team and Chris Waddle in the stands.

• The most spot kicks ever scored in a penalty shoot-out in the UEFA Champions League came in 1993/94 preliminary round when Skonto of Latvia beat Olimpija Ljubljana of Slovenia 11-10.

• The Turkish Cup last-16 tie between Galatasaray and Gençlerbirliği on 28 November 1996 saw 32 consecutive penalties scored, a record for a top-level shoot-out. Galatasaray substitute İlyas Kahraman missed their 17th before Gençlerbirliği converted to triumph 17-16. Galatasaray goalkeeper Hayrettin Demirbaş successfully slotted his own kick but let in all 17 he faced despite Fatih Terim shouting at him to open his hands when diving for the ball. Hayrettin's opposite number Kubilay Aydın was overheard saying to him during the drama "it's a disgrace for both of us – man, at least you save one" and "let this finish".

• Just a month earlier, the French Cup fifth round tie between Obernai and Wittelsheim went to penalties but was halted when the score reached 15-15 after 20 kicks each. Bad light stopped play, and under competition regulations, the lower-division club Obernai progressed after what is considered the longest European shoot-out in a major competition.

Shortest
• The fewest penalties scored in a major shoot-out was on a showpiece occasion, Steaua București edging Barcelona 2-0 in the 1986 European Cup final, with Helmut Duckadam keeping out all four of the Spanish contenders' penalties.

Most frequent
• After UEFA changed the regulations of the European U17 Championship for 2011/12 to remove the possibility of extra time, the first three finals went to penalties, resulting in second titles for the Netherlands, Russia (who also won on spot kicks in 2006) and England.

Some advice from the master...