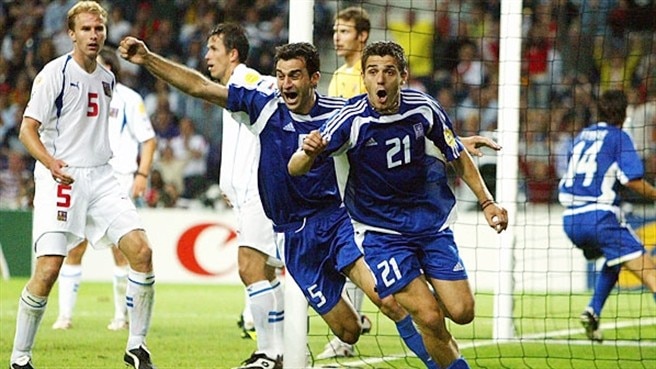 Greece continued their incredible march to UEFA EURO 2004 glory with this absorbing semi-final triumph, Traianos Dellas heading in the silver goal in added time at the end of the first half of extra time.

The Czech Republic came close to the victory so many had predicted, Tomáš Rosický volleying against the woodwork inside two minutes. But Otto Rehhagel's dogged side, 80-1 outsiders before the finals, dug in again and then, when it was least expected, came the counter. Vassilios Tsiartas swung over a corner, and Dellas nipped in to steer in a header at the near post and send the Greeks and their fans into ecstasy.

The Czechs sank – how different things might have panned out if Rosický had found the net? They maintained the early pressure after that, Nikopolidis beating away Marek Jankulovski's fierce drive for a corner moments later. Greece finally broke out, with Georgios Karagounis able to test Petr Čech with a free-kick, and the underdogs slowly settled down after a nervous opening to the match.

It became a tight contest between the Czechs' superior technique and Greece's industry and commitment. Nikopolidis had to dive at Pavel Nedvěd's feet to halt a mazy run then made a brilliant save to deny Jankulovski as Karel Brückner's men resumed control, though the loss of Nedvěd through injury curtailed them.

On came Vladimír Šmicer, assuming a role on the left of midfield with Rosický taking over playmaker responsibilities – not that they were initially needed in a tense, foul-ridden opening to the second half. Slowly the Czechs upped the ante, Karel Poborský curling a free-kick wide, Baroš inadvertently blocking Jan Koller's header and then Rosický missing the target from 20 metres.

The stalemate persisted, and it looked increasingly like a single goal would settle the game. Vryzas almost did the trick but his header was straight at Čech from a Karagounis free-kick. At the other end Poborský's audacious lob sailed over and Koller shot wide when unmarked in front of goal before Baroš wriggled through the Greek defence only to curl his effort wide of the far post as the Czechs pressed for a late winner.

But Greece, who saw Karagounis pick up an 87th-minute booking that would rule him out of the final, held on to force extra time. And then they awoke, all fresh legs, pushing forward constantly. Stelios Giannakopoulos and Dellas both tested Čech with headers before the goalkeeper was beaten with a goal that sent more than 100,000 people onto Athens' Omonia Square in celebration, while ex-pats stopped traffic in Sydney, Australia. Imagine what a final victory would do?