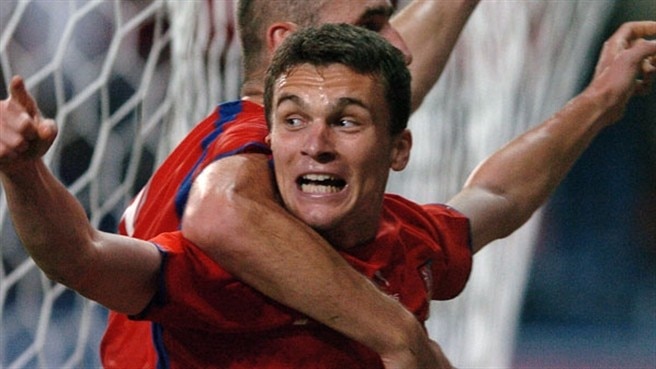 David Lafata had a fine night in Teplice ©Getty Images

Dramatic double
The Czechs failed to find their fluency against a well-organised Wales side, for whom Craig Bellamy had several opportunities, but finally broke through 14 minutes from time when Lafata – who had come on less than 60 seconds before – nodded in Libor Sionko's cross from close range. Martin Jiránek then turned David Cotterill's centre past Petr Čech to restore parity with five minutes remaining and seemingly earn the visitors a draw, but Lafata bounced a low shot past Paul Jones to claim all three the points.

Bellamy chances
Jones had been called upon to block Marek Kulič's early effort after the striker had sprung the offside trap, but Wales might easily have taken the lead seven minutes later, Čech dropping Ryan Giggs's left-wing cross to the feet of Bellamy only for the forward to blaze over. Bellamy had another glorious chance on the half-hour, latching on to a long Giggs pass. Čech initially thwarted the No7 but Bellamy beat the keeper at the second attempt only to send his left-foot effort wide.

Lafata dream
Tomáš Rosický curled a shot at Jones before playing a clever one-two with Jan Koller at the start of the second period before driving past the post. Bellamy's pace meant the visitors always threatened on the break, however, and the No7 evaded the attentions of two defenders before rattling the right-hand post. Seconds later, though, Lafata struck the opener. Wales refused to concede defeat, Cotterill linking up with fellow replacement Robert Earnshaw to create the equaliser as the luckless Jiránek prodded past his own keeper. Yet Sionko then set up Lafata for the decisive intervention in the final minute. The Czechs visit Slovakia on Wednesday, with Wales entertaining the same opponents on 7 October.