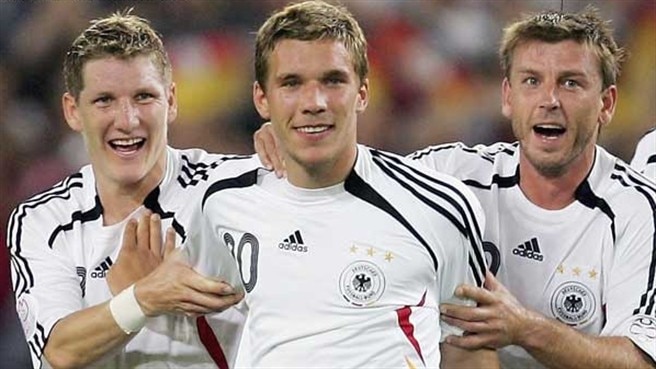 A deflected Lukas Podolski free-kick gave Germany a hard-fought victory in their opening UEFA EURO 2008™ Group D qualifier despite a heroic effort from Republic of Ireland goalkeeper Shay Given.

Deflected winner
The visiting No1 had pulled off a string of saves but once Podolski's 56th-minute set-piece had been unwittingly diverted by Robbie Keane, there was nothing Given could do. It was enough for Joachim Löw to make a winning competitive start as Germany coach as they attempt to build on their FIFA World Cup third-placed finish.

Keane denied
After a tight opening, a fine eleventh-minute ball into the box from Michael Ballack was an early warning for Ireland, seeking a first EURO qualification since 1988. At the other end Keane had a shot blocked, while the first great Given stop came in the 28th minute when he dived to turn away a Miroslav Klose header. A minute later Given did well to frustrate Podolski, and the striker then put his next effort narrowly wide.

Deadlock broken
Germany had not been dominant in the first half, and Ireland nearly scored early in the second when a Steven Reid free-kick caught out Jens Lehmann only for the ball to rebound to safety off the Arsenal FC keeper. That scare spurred on the hosts and Given had to produce another spectacular save from Klose's clever strike. Ireland were now on the back foot and following a foul by Reid on Torsten Frings, Podolski's set-piece broke the deadlock via Ireland captain Keane.

Klose close
Ireland's competitive debutant Kevin Doyle nodded wide in the 67th minute, yet Germany then broke and Given dived to deny Bernd Schneider. Klose headed against the bar, while Richard Dunne went close for Ireland whose coach Steven Staunton was sent to the stands for dissent. Bastian Schweinsteiger hit the woodwork with a free-kick in an exciting finale. His team can now look forward to Wednesday's match in San Marino, while Ireland must wait until their 7 October trip to Cyprus for their next fixture.