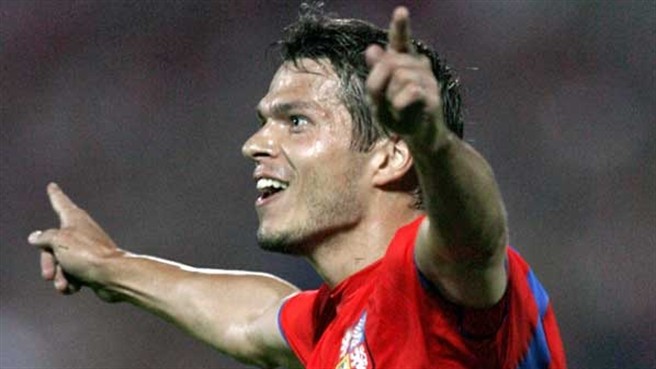 Libor Sionko scored two first-half goals in Bratislava and set up another for Jan Koller to send the Czech Republic clear of their rivals in UEFA European Championship qualifying Group D.

Swapped places
The Rangers FC forward found the net in the tenth and 21st minutes before playing in AS Monaco FC's Koller to wrap things up midway through the second half, ensuring the visitors swapped places with Slovakia and moved on to maximum points along with Germany. The Czech Republic will be confident of staying there as they entertain San Marino on 7 October, when Slovakia are in Wales.

Aggressive start
Slovakia, who have not beaten their neighbours since 1998 FIFA World Cup qualifying, had looked the brighter team during the early exchanges. Filip Sebo, a team-mate of Sionko in Glasgow, was in aggressive mood, first felling Martin Jiránek on 21 seconds, then fouling Jaroslav Plašil a minute later. Sebo was in the thick of the action again with barely five minutes completed, breaking forward to fire over the bar from distance.

Headed opener
Koller announced the Czech Republic's presence with an unsuccessful long-range drive moments later, and the visitors were soon in their stride. Marek Jankulovski crossed from the right in the tenth minute and Sionko headed into the top corner to make it 1-0. Dušan Švento led the home revival, going close soon after, but the Czech goal remained intact and Sionko doubled the away advantage with his second on 21 minutes.

Neméth on
Plašil centred from the left and Sionko steered the ball inside Kamil Čontofalský's left-hand post from the edge of the box. Slovakia responded by sending on Szilárd Németh up front for defender Marek Čech but it did not reap obvious rewards, and it was only when Ján Ďurica's header forced Petr Čech to tip over on 44 minutes that the home fans had cause for excitement. Slovakia launched a flurry of shots after the break, but Koller ended all resistance by latching on to Sionko's lay-off and firing low into the net in the 57th minute.