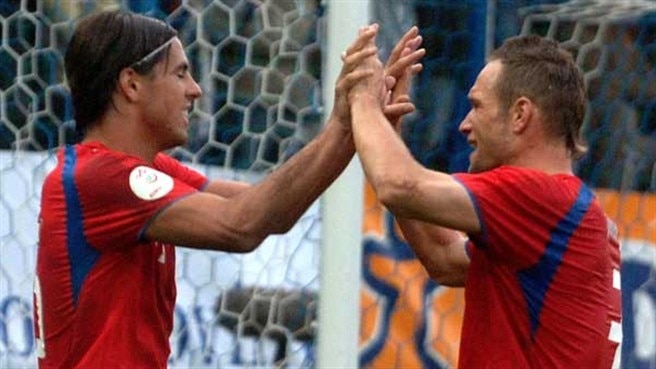 The Czech Republic continued their sprightly start to UEFA EURO 2008™ qualifying with a convincing home success against San Marino to equal their record margin of victory.

Fine form
After a 2-1 home win against Wales and a 3-0 triumph in Slovakia, the Czechs put seven without reply past the minnows in Liberec. Milan Baroš, back for the first time since the FIFA World Cup, and Jan Koller each scored twice in the rout, to leave Karel Brückner's men with a 100 per cent record from their three Group D games while San Marino are bottom of the section with two defeats, and 20 goals conceded. Visiting coach Giampaolo Mazza may perhaps take comfort from the fact his side improved on the 13-0 defeat by Germany in their opening qualifier.

Swift start
Goalkeeper Federico Valentini, making his debut, was called into action twice inside the first three minutes by Marek Jankulovski and David Jarolím. It was no surprise then when Marek Kulič struck from the edge of the box to make the breakthrough. Seven minutes passed before Jarolím teed up Jan Polák to steer the ball beyond Federico Valentini and double the lead. The visitors had little to offer in return and the Czech Republic defence had yet to be tested when the fit-again Baroš added his name to the scoresheet after Koller's assist.

Cěch alert
The pair combined again three minutes before half-time with Baroš crossing and Koller heading in from five metres. Carlo Valentini had San Marino's first serious attempt just after the restart but Petr Cěch was equal to it and any enthusiasm was soon killed by two more goals in the space of four minutes. Jarolím converted Tomáš Ujfaluši's pass for the fifth goal after 49 minutes and then Koller got his second, this time registering with his right foot after Jankulovski had provided the assist.

Ireland next
Baroš eventually joined Koller on a brace, nodding in from close range to ensure an identical margin of victory to the Czechs' 8-1 triumph against Andorra in World Cup qualifying in 4 June 2005. Confidence should not be a problem when they go in search of a fourth straight win in the Republic of Ireland on Wednesday.