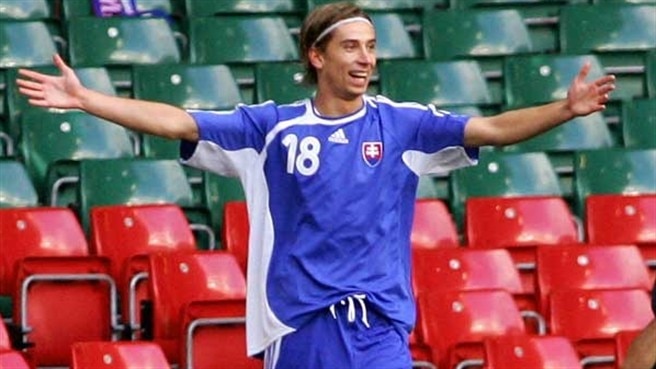 Slovakia inflicted a nightmare 50th appearance on Wales goalkeeper Paul Jones as they condemned the principality team to their heaviest-ever qualifying home defeat.

Švento scores
Wales began with high hopes having lost narrowly to the Czech Republic in their opening UEFA EURO 2008™ Group D game, while Slovakia had followed up a 6-1 home win against Cyprus by falling 3-0 to their neighbours in Bratislava. Although Wales were missing injured captain Ryan Giggs among several absentees, they made a bright start in Cardiff but things swung Slovakia's way on 14 minutes when Dušan Švento turned in Robert Vittek's cross.

Lead increases
Robert Earnshaw and Simon Davies threatened for the home side, but just after the half-hour Jones, whose hair was specially shaved to celebrate his personal landmark, had a moment to forget. The goalkeeper ran out of his box to clear but the ball found only Marek Mintál, who calmly curled his shot in from long range. Wales were given hope five minutes later when 17-year-old Gareth Bale struck his first international goal with a perfectly-hit free-kick. Within seconds, though, Mintál restored Slovakia's two-goal advantage with a strong drive that beat Jones at his near post.

Slovakian delight
Stand-in Wales captain Craig Bellamy's effort went just wide not long before the break, but only six minutes after the interval it was 4-1. Ján Kozák directed a Slovakia corner deep to Miroslav Karhan, whose long-range swerving shot gave Jones no chance. Davies immediately forced a save from Kamil Čontofalský, but in the 59th minute Vittek joined the list of Slovakia scorers as he connected with a centre from Švento, repaying the favour from the first goal.

Germany visit
For Wales, thoughts must now turn to the visit of Cyprus to the Millennium Stadium on Wednesday, as John Toshack's men attempt to wipe out the memory of this loss. Slovakia, meanwhile, will be full of confidence as they look ahead to their own home fixture that day against Germany.