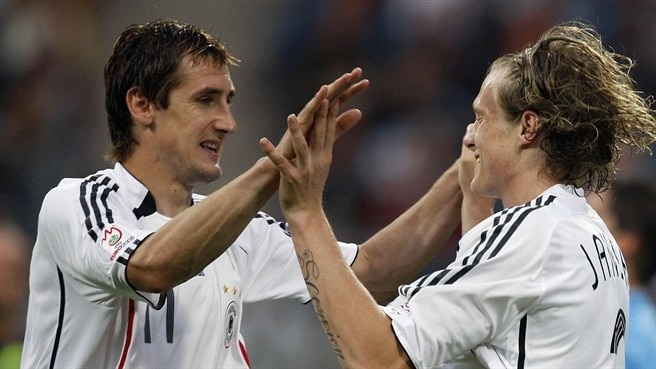 Germany 6-0 San Marino Germany edged closer to the finals of UEFA EURO 2008™ with an emphatic win in Nuremberg.
Read more

Germany edged closer to a place in the finals of UEFA EURO 2008™ with an emphatic win against San Marino in Nuremberg.

Kuranyi opener
The visitors began the evening without a point to their name, yet they equipped themselves well early on, keeping Joachim Löw's team at bay until Kevin Kuranyi's 45th-minute opener. The floodgates then opened as Marcell Jansen doubled Germany's lead, Torsten Frings added a third from the spot, Mario Gomez scored twice and Clemens Fritz also found the net.

Hitzlsperger denied
Germany camped inside the San Marino half from the start and Thomas Hitzlsperger had three shots blocked as Giampaolo Mazza's players created a wall of blue. Miroslav Klose's headed wide while Kuranyi had a 37th-minute strike disallowed for offside. Kuranyi had better luck in the last minute of the half, looping a header into the far corner to break the deadlock. With San Marino's resistance broken, the remainder of the game was a procession. Jansen tapped the ball in on 52 minutes after Aldo Simoncini had knocked Frings' corner into his path, then defender Davide Simoncini was sent off for a second yellow card as he conceded a penalty, dispatched by Frings in the 56th minute.

Gomez back-heel
Gomez replaced Kuranyi and within five minutes the VfB Stuttgart striker had scored twice. His first was a tap-in after Frings' 63rd-minute free-kick was only parried by Simoncini and moments later he back-heeled in Jansen's cross. Another substitute, Fritz, got on the scoresheet with the game's most attractive goal midway through the second half, playing a one-two with Frings and finishing with the outside of his boot. The result takes Germany top of Group D, two points ahead of the Czech Republic with a game in hand. They play host to Slovakia on Wednesday while bottom side San Marino are not in action again until August when they play Cyprus.