Published: Thursday 7 June 2007, 0.56CET
Germany 2-1 Slovakia The home side moved five points clear at the top of Group D courtesy of this narrow success in Hamburg that featured two own goals. 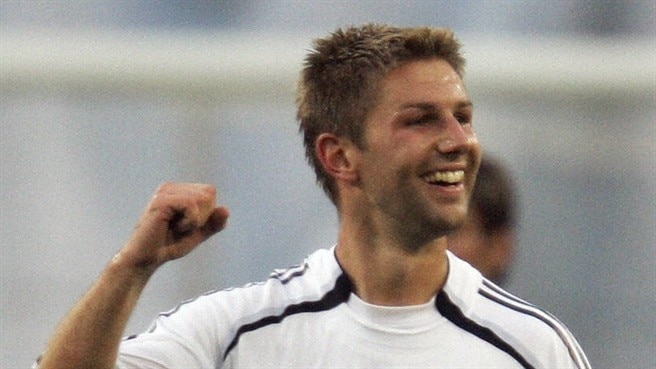 Germany 2-1 Slovakia The home side moved five points clear at the top of Group D courtesy of this narrow success in Hamburg that featured two own goals.
Read more

Germany moved five points clear at the top of UEFA EURO 2008™ qualifying Group D with a 2-1 victory over Slovakia in Hamburg. After Ján Ďurica and Christoph Metzelder had traded own goals, Thomas Hitzlsperger struck the hosts' winner two minutes before the break.

Ďurica own goal
Hitzlsperger also threatened early on as Germany started on the offensive. Yet while their opening goal after ten minutes was not unexpected, it did come via a large slice of luck. Marcell Jansen burst clear down the right and pulled the ball back from the byline. The Slovakia defence failed to clear and Ďurica deflected the ball into his own net under pressure from Miroslav Klose.

Luck evened out
Germany seemed in total control but Slovakia got back on terms in bizarre fashion on 20 minutes. Attempting to thwart the run of Matej Krajčík, Metzelder inadvertently toe-poked the ball past Jens Lehmann at his near post. That setback knocked Germany out of their stride briefly though they almost regained their lead after 33 minutes when Bernd Schneider flicked just wide from Klose's cross. Joachim Löw's men only had to wait ten minutes more to restore their advantage, Hitzlsperger heading home after 43 minutes. Philipp Lahm curled in a left-footed cross from the right and the VfB Stuttgart player met his delivery with a firm downward header.

Second half stalemate
Germany continued to have the better of things in the second half with Clemens Fritz and Mario Gómez both going close as the hosts sought a clinching goal. It was not needed in the end as they held out for the victory that leaves them five points clear of the Czech Republic atop Group D. While they can look forward with confidence to resuming their campaign in Wales in September, fourth-placed Slovakia will require a win against the Republic of Ireland to revive their fading hopes.