Hard work pays off for Czechs

Published: Sunday 9 September 2007
San Marino 0-3 Czech Republic The visitors were made to toil by ten-man San Marino for a victory that consolidated second place in qualifying Group D. 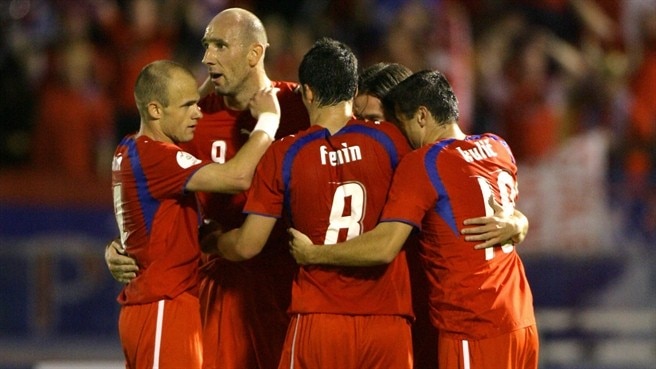 Hard work pays off for Czechs

San Marino 0-3 Czech Republic The visitors were made to toil by ten-man San Marino for a victory that consolidated second place in qualifying Group D.
Read more

The Czech Republic picked up the expected win in San Marino which consolidated second place in UEFA EURO 2008™ qualifying Group D but they were made to work by their hosts.

Victory earned
Tomáš Rosický scrambled in the opening goal but Marek Jankulovski and Jan Koller only settled matters in the second half after Alessandro Della Valle had been sent off for San Marino. The Czech Republic remain five points behind Germany but Slovakia's late equaliser against the Republic of Ireland leaves Karel Brückner's side with a three-point cushion over the team they welcome to Prague on Wednesday.

Czechs ahead
San Marino almost took a shock lead on two minutes when Petr Čech was forced to save by Carlo Valentini, and Andy Selva made the Chelsea FC goalkeeper work soon after. The visitors counterattacked and won a corner which Rosický sent on to the head of Koller but San Marino keeper Aldo Simoncini cleared the danger. Fabio Bollini then became the next player to test Čech, before Sammarinese dreams of a first UEFA European Championship point began to fade. Simoncini denied Marek Kulič and Martin Fenin, yet was finally beaten on 33 minutes when he got a fist to a Kulič effort only to see Rosický head in.

Points secured
The Czech Republic pushed for a second goal after the break and Koller nodded over before David Jarolím shot straight at Simoncini. Their task was made easier when Della Valle was shown a yellow card for a foul, then immediately booked again for dissent on 64 minutes. San Marino eventually succumbed once more when Jankulovski fired in a free-kick with 15 minutes remaining. Koller headed in a late third from substitute Stanislav Vlček's cross and a victory against Ireland in midweek would leave the Czech Republic within sight of the finals.