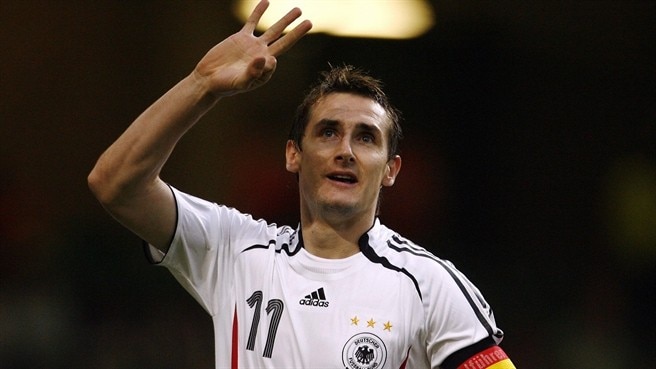 Two Miroslav Klose goals gave Germany a comfortable win in Wales that takes the Group D leaders to the verge of the UEFA EURO 2008™ finals.

One win away
Klose, captaining Germany for the first time in the injured Michael Ballack's absence, opened the scoring early on in Cardiff and his header on the hour to double the advantage was the very least the visitors deserved. They maintain the best record in any group having dropped just two points and are five ahead of the second-placed Czech Republic. Indeed, Germany go to the Republic of Ireland on 13 October knowing a victory would seal qualification

Klose strikes
Within five minutes Germany were ahead. Kevin Kuranyi raced forward from midfield and played the ball into the path of Klose, who produced a neat finish. Kuranyi broke through again in search of a second goal but was dispossessed by Lewin Nyatanga, before Thomas Hitzlsperger sent a free-kick centimetres over the bar. Kuranyi was then denied by James Collins as Germany's dominance continued unabated, with Wales grateful to go in at half-time only 1-0 down.

Second goal
There was little change to the pattern of the game after the interval. Roberto Hilbert forced a save from Wayne Hennessey, Bastian Schweinsteiger shot on to the top of the bar, before Klose struck again on the hour mark with a close-range header after Hilbert had tackled Gareth Bale and crossed into the box. Klose now wanted a hat-trick to mark his 70th cap but he fired straight at Hennessey before heading just past the post from a Marcell Jansen centre. Robert Earnshaw sent a rare Wales salvo narrowly over the bar but a comeback was never on. Wales, in fifth, visit Slovakia on Wednesday.