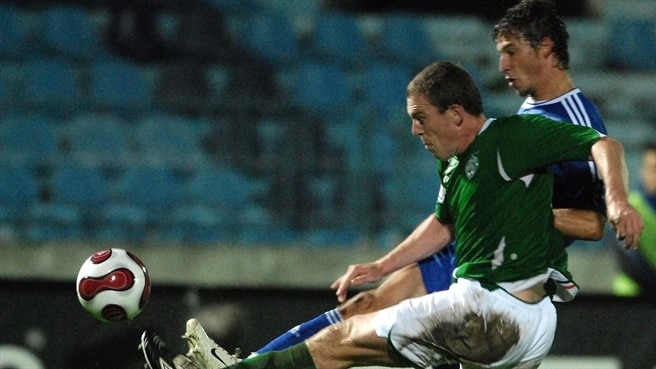 Slovakia 2-2 Republic of Ireland A thunderous added-time strike from Marek Čech rescued a crucial Group D point for the home side against Ireland.
Read more

A thunderous strike from Marek Čech earned Slovakia a crucial point that keeps alive the home side's faint qualifying hopes in Group D while dealing a potentially fatal blow to the Republic of Ireland's chances of reaching next summer's finals.

Late drama
Goals from Stephen Ireland and Kevin Doyle – the second a devastating shot on the turn three minutes before the hour – either side of Maroš Klimpl's equaliser, looked to have given Stephen Staunton's men the three points that would have kept the pressure on the Czech Republic going into the teams' meeting in Prague on Wednesday. Čech had other ideas, though, drilling in from just outside the area a minute into added time to snatch a draw with another home game, against Wales, to come for Slovakia in four days' time.

Ireland opener
There had been a minute's silence before kick-off in memory of former Czechoslovakian international Viliam Schrojf, who died on 1 September at the age of 76, but it was the visitors who began the brighter in Bratislava. They took the lead with a well-worked goal in the seventh minute. Kevin Kilbane broke clear down the left and his deflected cross was brilliantly dummied by Robbie Keane, leaving Ireland, pressing forward from midfield, to lift a simple finish over Štefan Senecký.

Doyle delight
The Irish failed to build on that early advantage, however, with goalkeeper Shay Given having to make a fine block from Marek Sapara before sustained Slovakia pressure was rewarded with an equaliser eight minutes before half-time. Sapara was the architect, Ján Ďurica flicking on his left-wing corner for the determined Klimpl to head in at the far post. Marek Mintál threatened early in the second period, although when a third goal did arrive it came at the other end: Doyle worked space 25 metres out and unleashed an unstoppable left-foot shot into the top corner. Just as Irish celebrations were starting in earnest, though, Čech popped up to salvage Slovakia's evening.