Czechs close in on finals place 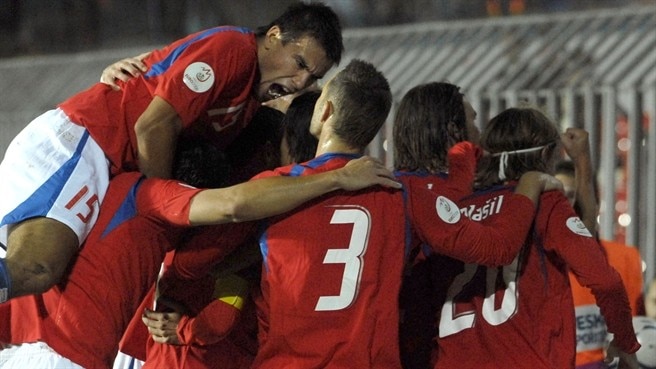 Czechs close in on finals place

A well-worked early goal from Marek Jankulovski gave the Czech Republic a crucial win against ten-man Republic of Ireland as Karel Brückner's side closed in on a place at UEFA EURO 2008™.

Jankulovski joy
The home team kicked off with a three-point cushion over their visitors in second place in Group D and AC Milan full-back Jankulovski combined with Jaroslav Plašil in the 15th minute to score what proved to be the only goal of the game. The visitors pressed for an equaliser, Kevin Doyle twice going close, but the dismissal of substitute Stephen Hunt left them with too much to do. A home game against section leaders Germany on 13 October is their next challenge while the Czechs face the same opponents four days later.

Quickfire start
The hosts were quickly into their stride at the Sparta Stadium, Libor Sionko's shot deflecting wide but a breakthrough was not long in coming, Jankulovski exchanging passes with Plašil and skipping past Richard Dunne to drill in. Sionko spurned another presentable opportunity and Ireland finally began to exert some pressure of their own, Dunne exploiting a Sionko miskick to play Doyle in on goal and the Reading FC striker guided his left-foot shot beyond Petr Čech only for the post to come to the goalkeeper's rescue.

Hunt off
The second half began in similar fashion to the first, Milan Baroš curling wide before Tomáš Rosický was denied by a fine stop from Shay Given. Ireland's hopes were further undermined by the 61st-minute dismissal of Hunt for a challenge on Jan Polák, although a swift counterattack then gave Doyle another glimpse of goal but this time his shot flashed past the far post. The visitors came even closer moments later as Čech failed to gather a free-kick and David Rozehnal had to turn Dunne's effort off the line but the Czechs held out.