Wales win with style in Slovakia 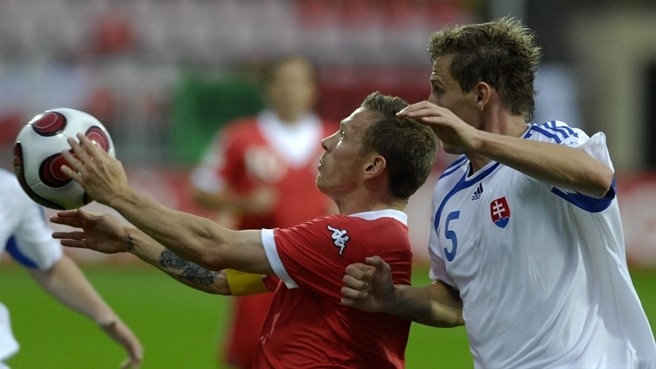 Wales win with style in Slovakia

Slovakia 2-5 Wales The Welsh made amends for last year's 5-1 home defeat by Slovakia by claiming a similarly comprehensive victory in Trnava.
Read more

Wales made amends for their 5-1 home defeat by Slovakia early in UEFA EURO 2008™ qualifying with a comfortable victory in Trnava tonight.

Comeback
Although Marek Mintál gave Slovakia a 12th-minute lead, Freddy Eastwood soon equalised and Wales captain Craig Bellamy struck twice to put his team 3-1 up at the break. Mintál pulled one back but a late Ján Ďurica own goal and Simon Davies' strike settled matters. Wales join fourth-placed Slovakia on ten points in Group D, today's visitors being behind on head-to-head record but having a game in hand.

Quick response
If it was a quiet opening, Slovakia scored with virtually the first chance when Mintál pounced after a defensive slip. Mintál then forced a superb save from Wayne Hennessey, who also denied Marek Čech, yet only ten minutes after the goal the game changed. Bellamy began the move as he set Joe Ledley away down the left, and his cross was ideal for Eastwood to turn in.

Bellamy goals
On 34 minutes Bellamy was sent clear by Ledley and he coolly chipped Štefan Senecký to put Wales ahead. Bellamy, who had missed Saturday's home defeat by group leaders Germany to be with his newborn baby, found the target again just before the break. Ledley reprised his role as creator with a clever ball that his captain finished from a tight angle.

Win sealed
Arrears were reduced in the 57th minute when Čech cut back the ball for Mintál, who took his opportunity well. However, the away fans, in good voice, had more to sing about when Bellamy's ball across the face of goal was deflected in by the luckless Ďurica. Davies' strong shot made it 5-2 late on. On 13 October Slovakia welcome San Marino while Wales are in Cyprus.