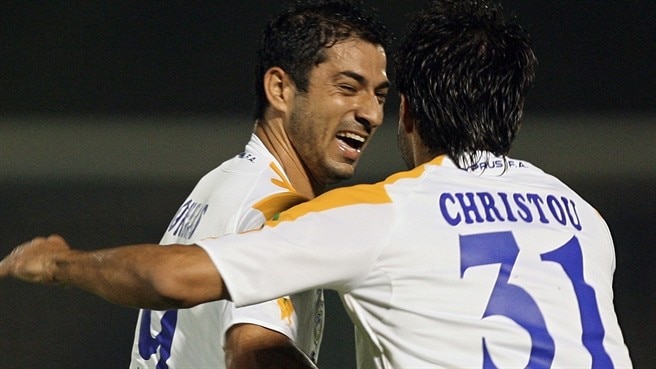 Okkas double
Both these teams were coming off fine results – Cyprus having enjoyed two straight defeats of San Marino and Wales a 5-2 success in Slovakia. The visitors led at the break here through James Collins but Cyprus always had the better of the play and Yiannis Okkas scored twice to turn the game before substitute Konstantinos Charalampidis headed a goal that took his country above their opponents into fifth place.

Wales ahead
The hosts were without injured striker Michalis Konstantinou yet were on top from the start with Okkas dictating proceedings. However, it was the man charged with watching Okkas in the Wales defence who broke the deadlock: Gareth Bales's free-kick from the left found Collins unmarked at the far post and the West Ham United FC player's angled shot nestled inside the opposite side-netting.

Bellamy denied
Despite that setback, Cyprus kept up the pressure and Alexandros Garpozis headed at goalkeeper Danny Coyne, while Collins limped off just before the break. Okkas had a goal ruled out for offside early in the second period and Wales nearly punished Cyprus again on the break but captain Craig Bellamy's shot was kept out by the diving Antonis Georgallides.

Turnaround
Just before the hour, the match changed as Efstathios Aloneftis's free-kick from the right eluded Coyne and was nodded in by Okkas. The No9 put Cyprus ahead nine minutes later when Yiasoumi Yiasoumi's free-kick went loose and Aloneftis touched the ball across for Okkas to smash in from close range. Charalampidis completed the victory after fellow substitute Yiasoumi had headed Garpozis's centre back across goal.