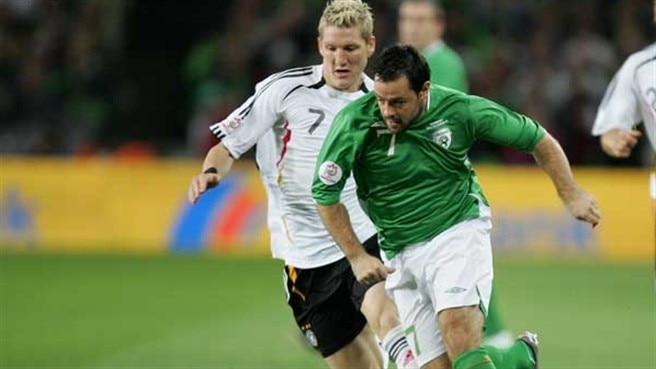 Germany have become the first team to qualify for UEFA EURO 2008™ alongside hosts Austria and Switzerland with a draw that keeps the Republic of Ireland's hopes of joining them in the finals mathematically alive.

Germany confirmed
Group D leaders Germany began the day eight points clear of third-placed Ireland, knowing that avoiding defeat at Croke Park would be enough to seal a top-two finish. In a tight game the visitors duly achieved that aim, and while Ireland are five points behind the Czech Republic, they can still pip their rivals if Stephen Staunton's team overcome Cyprus and Wales in their remaining matches and the Czechs lose in Germany on Wednesday and against Slovakia and Cyprus next month.

Schweinsteiger injured
From the start it was an open contest and throughout both sides looked capable of scoring. Bastian Schweinsteiger was forced off with a head injury midway through the first half, Simon Rolfes taking over, but Germany were in positive mood and Mario Gómez's shot bounced just over on 20 minutes. At the other end, Andy Reid's clever ball found Robbie Keane but the Tottenham Hotspur FC striker could not beat Arsenal FC goalkeeper Jens Lehmann. The best chance of the first half came not long before the break as Christoph Metzelder headed a corner towards goal but Steve Finnan cleared off the line.

Lehmann heroics
Ireland began the second period brightly and Lee Carsley's cross-shot drifted towards goal, forcing Lehmann to tip over, and soon after the keeper was relieved when Keane, in space and with only the No1 to beat, sliced his attempted chip. Lukas Podolski had a shot deflected over and then drove just wide, while Lehmann did well to deny Ireland substitute Shane Long. It could have gone either way until the final minute, but no goal arrived and Germany are through.