Czech high-fliers too strong for Slovakia

Published: Sunday 18 November 2007, 0.15CET
Czech Republic 3-1 Slovakia
The Czechs remain in pole position to finish top of Group D after this comfortable defeat of their neighbours. 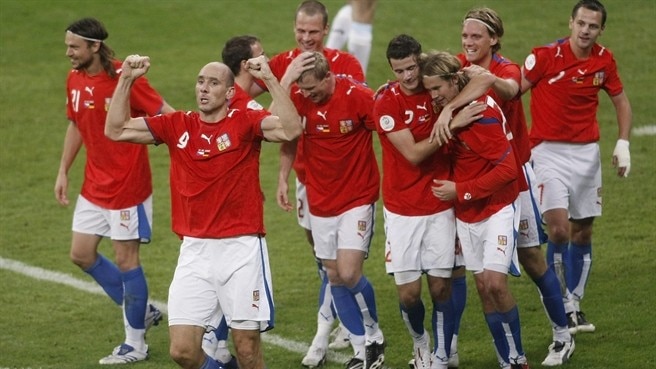 Czech high-fliers too strong for Slovakia

Czech Republic 3-1 Slovakia
The Czechs remain in pole position to finish top of Group D after this comfortable defeat of their neighbours.
Read more

Czechs top
The Czechs, already assured of qualification from the pool alongside Germany, ended the day ahead of Joachim Löw's team courtesy of their superior head-to-head record after this deserved win in Prague. Zdeněk Grygera fired them into an early lead before Marek Kulič profited from a mistake by visiting keeper Kamil Čontofalský to make it 2-0 on 76 minutes. Michal Kadlec's own goal offered Slovakia hope but Tomáš Rosický wrapped up the points with a late drive.

Grygera opener
Grygera opened the scoring in the 13th minute. After exchanging passes with Zdeněk Pospěch he unleashed a shot across Čontofalský and into the bottom corner. Karel Brückner's team continued to apply pressure after the break and midfielder Jan Polák nearly doubled their advantage when he rattled the crossbar after Jan Koller had set him up with a smart back-heel. Koller should then have killed the game when bearing down on goal following a neat through ball, but the giant forward was too slow and was closed down by Čontofalský. Koller was more effective at the other end, though, clearing Ľubomír Michalík's goal-bound flick off the line to keep his side ahead.

Late goals
The Czechs eventually went two goals in front when Čontofalský collided with a defender and spilled the ball into the path of substitute Kulič, who rolled it into the empty net. Home defender Kadlec then put through his own goal in the 79th minute to reduce the deficit for Slovakia. However, the hosts were always in control and restored their two-goal cushion when Rosický's low strike from just inside the box found its way past Čontofalský.