Published: Sunday 18 November 2007, 0.14CET
Germany 4-0 Cyprus Germany kept up the pressure on the Czech Republic in the race for top spot in Group D with a comfortable win in Hannover. 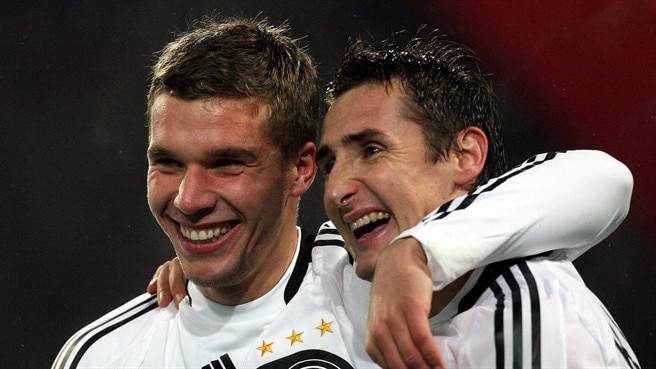 Lukas Podolski was in inspired form for Germany ©Getty Images

Germany 4-0 Cyprus Germany kept up the pressure on the Czech Republic in the race for top spot in Group D with a comfortable win in Hannover.
Read more

Germany maintained the pressure on the Czech Republic in the race for top spot in Group D with a comfortable 4-0 win against Cyprus.

Podolski in form
Both sides have already qualified for UEFA EURO 2008™ but Germany showed no sign of letting up as FC Bayern München pair Miroslav Klose and Lukas Podolski struck either side of half-time to build on Clemens Fritz's second-minute opener. Thomas Hitzlsperger added the fourth in the 82nd minute as Germany claimed their eighth win in the group to move level with the Czech Republic on 26 points.

Fritz strike
Germany were quick out of the blocks and celebrated their first goal after less than 120 seconds. Podolski's determination paid off and he pulled the ball back from the goalline for Fritz to score with a far-post header. Klose added the second on 20 minutes, accepting a pass from the selfless Fritz in a central position and firing in from eight metres.

Germany control
Germany were in control, with Podolski their main threat, and he finally got the goal an excellent performance warranted when he turned in Klose's low cross from the right eight minutes into the second half. The impressive Podolski turned provider for the final goal eight minutes from time, making a determined run to the goalline before squaring for Hitzlsperger, whose simple tap-in completed the scoring. Germany conclude their qualifying campaign at home to Wales on Wednesday when the Czech Republic travel to Cyprus.