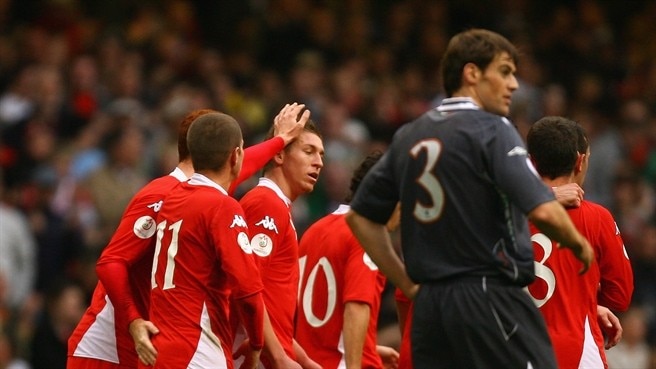 Jason Koumas scored an 89th-minute equaliser from the penalty spot as Wales denied the Republic of Ireland a victory in their final UEFA EURO 2008™ Group D qualifier.

Sub felled
With Germany and the Czech Republic having sewn up the two qualifying berths in the section, these teams were left playing for pride at the Millennium Stadium. Koumas lifted the home crowd with a super header after 23 minutes but it was Ireland who were on course for three points thanks to subsequent strikes either side of half-time by Robbie Keane (31) and Kevin Doyle (60). There was late drama, though, as Paul McShane brought down substitute David Cotterrill and Koumas made no mistake from the spot.

Great dummy
Koumas had already wasted one presentable opportunity before making amends with the opener. Wales left-back Chris Gunter played a pass down his flank to Joe Ledley who allowed it to run through his legs before turning and running past the bemused Steve Finnan. The cross was as good as the skill which preceded it, and Koumas rose brilliantly to head the centre back across goal and into the corner of Shay Given's net.

Cool finish
Ireland's equaliser also owed to a fine assist, as Doyle picked up possession on the halfway line, looked up and played a slide-rule pass to Keane who coolly dinked his 32nd international goal over advancing goalkeeper Wayne Hennessey. Doyle scored the second himself, racing in to touch in a delightful curled cross behind the home defence from his Reading FC team-mate Stephen Hunt, although it was Koumas who had the final say. Ireland, under caretaker manager Don Givens, finish with 17 points from their 12 qualifiers but could be overtaken by both Wales and Cyprus.