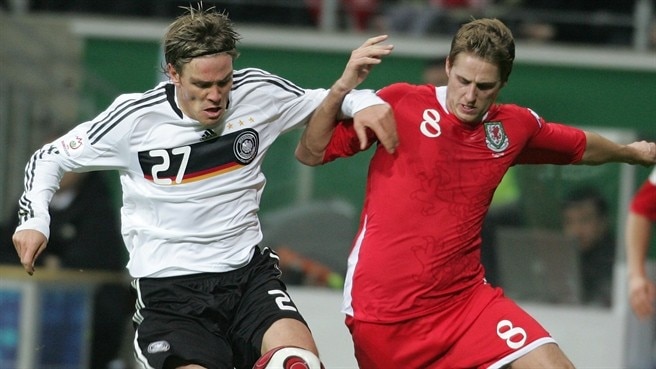 Wales ended a largely disappointing UEFA EURO 2008™ campaign on a notable high as they held already-qualified Germany to a goalless draw in Frankfurt.

Determination
Having claimed four points from their previous two Group D outings, John Toshack's team ensured they continued that good form with a resolute display. Led by inspirational captain Simon Davies, the visitors showed purpose from the kick-off as Germany's aspirations of winning Group D evaporated. The Czech Republic's victory in Cyprus would make that ambition redundant anyway, but Wales could still take heart after surviving a stern examination to make their point.

Collins clearance
The Welsh side had begun the brighter as Davies, Carl Fletcher and David Edwards bossed the midfield, even if Germany carved out the better openings. Thomas Hitzlsperger teed up Lukas Podolski on the edge of the box on ten minutes, before Tim Borowski rattled the upright after exchanging passes with Werder Bremen team-mate Clemens Fritz. Mario Gómez headed narrowly wide while Fletcher responded in kind as Wales refused to sit back. The British outfit tired as the game wore on, and keeper Wayne Hennessey was grateful for a clearance by James Collins after he had flapped at a cross and substitute Simon Rolfes had headed goalwards. Yet Wales resisted to finish in fifth place.