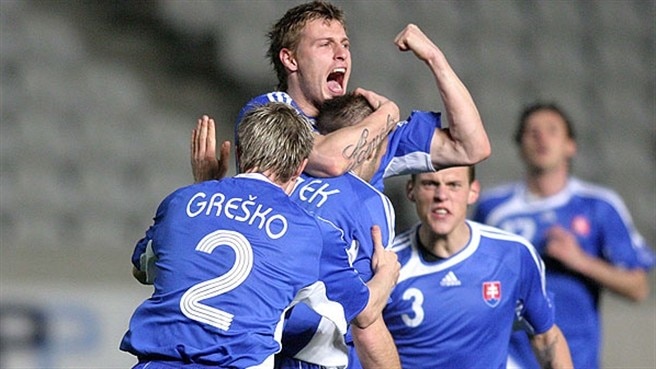 San Marino 0-5 Slovakia The visitors took 42 minutes to break the deadlock but went on to overwhelm San Marino in Serravalle in Group D.
Read more

Marek Čech struck twice as Slovakia ended their Group D campaign with a resounding 5-0 win against San Marino in Serravalle.

Michalík breakthrough
Having restricted Wales to a narrow 2-1 victory in their last outing, San Marino must have held hopes of another close encounter as the teams approached half-time with the score goalless. However, Ľubomír Michalík made the breakthrough three minutes before the interval and from then on it was one-way traffic. Within 12 minutes of the restart it was 4-0 as Filip Hološko, Marek Hamšík and Čech all got their names on the scoresheet, and Čech rounded off the victory seven minutes from time. The result was enough for Slovakia to leapfrog Wales and Cyprus into fourth, with San Marino 14 points adrift at the foot of the table.

Selva denied
San Marino ended their UEFA EURO 2008™ campaign with a 'goals against' tally of 57, yet things looked bright for Giampaolo Mazza's team in a lively opening. Andy Selva almost gave the hosts a shock lead when his free-kick struck the crossbar on five minutes and the same player tested Štefan Senecký with a long-range effort later in the half.

Floodgates open
After Michalík headed, however, in the floodgates opened. Six minutes after the restart Hološko nodded in Hamšík's corner to make it 2-0 and when Hamšík added a third from distance two minutes later, Slovakia were cruising. Čech quickly hit his first of the night and San Marino's misery was complete when the 24-year-old applied a crisp finish to Juraj Halenár's pass to make it 5-0.