Hasi leaves it late for Albania 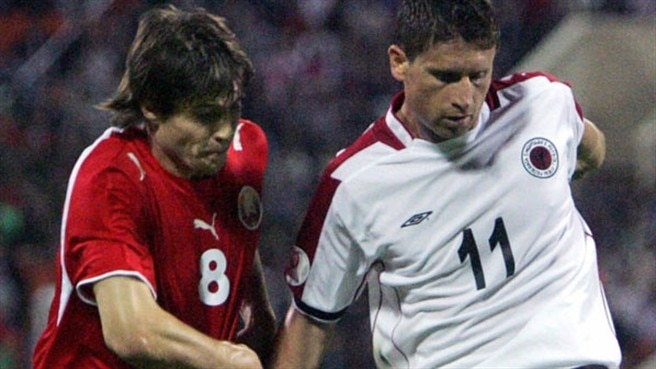 Hasi leaves it late for Albania

A late equaliser from veteran Besnik Hasi secured a terrific point for Albania in the first match of their UEFA European Championship qualifying campaign.

Twice in front
The KSC Lokeren OV midfielder, who will turn 35 in December, fired in a long-range effort in the 86th minute to ensure it would be honours even in the Dinamo stadium in Minsk. Belarus had twice taken the lead and will be bitterly disappointed not to have got their Group G campaign off to a winning start, particularly as they visit Eindhoven to face the Netherlands on Wednesday.

Perfect start
Timofei Kalachev gave Belarus the initiative with a neat close-range finish with just two minutes on the clock, but Albania hit back five minutes later when Ervin Skela converted from the spot after Vladimir Korythko had upended Igli Tare. Korythko was eager to atone for his error, but his strike from distance flew the wrong side of the upright, while team-mate Denis Kovba was denied by Albania goalkeeper Ilion Lika.

Early pressure
Lika was forced into action again as Belarus piled on the early pressure, beating away Maksim Romashchenko's low drive and then saving Viacheslav Hleb's right-footed effort. The hosts regained the advantage after 24 minutes when Romashchenko found the bottom corner of the net from inside the area. Albania again looked for an instant response but Belarus keeper Vasili Khomutovski managed to keep out Altin Lala's header.

Point earned
The visitors were still seeking the equaliser in the opening stages of the second half. Armend Dallku blasted wide and then saw a long-range attempt blocked by Aleksandr Kulchy. At the other end, Kulchy's shot was parried by Lika. Tare nodded wide for Albania and Dallku also threatened, while Sergei Omelyanchuk tried to undo Albania on the break but the defender fired off target. The fourth goal of the night finally arrived when Hasi gave Khomutovski no chance. Albania will hope to build on the point earned when they welcome Romania to Tirana in four days.