Published: Thursday 7 June 2007, 0.15CET
Bulgaria 2-1 Belarus Chavdar Yankov and Martin Petrov were on target as the home team came from a goal down to extend their unbeaten start to Group G. 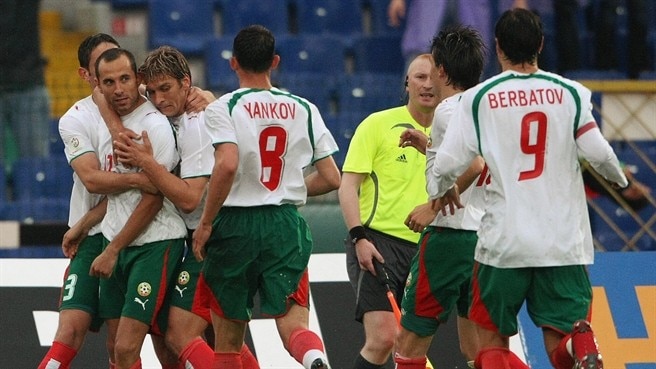 Bulgaria 2-1 Belarus Chavdar Yankov and Martin Petrov were on target as the home team came from a goal down to extend their unbeaten start to Group G.
Read more

Bulgaria came from a goal down to extend their unbeaten start to UEFA EURO 2008™ qualifying to seven games with a 2-1 victory against Belarus in Sofia.

Yankov winner
Dimitar Berbatov scored twice to secure a comfortable 2-0 triumph when these teams met four days ago in Minsk but hopes of a repeat were quickly dashed at the Vasil Levski National Stadium. Just five minutes had gone when Aleksandr Hleb was upended in the penalty area by goalkeeper Dimitar Ivankov and Roman Vasilyuk made no mistake from the spot. The hosts responded swiftly, levelling through a Martin Petrov free-kick before Chavdar Yankov completed the turnaround five minutes from half-time as Stanimir Stoilov's men leapfrogged the Netherlands into second place in Group G.

Dream start
The fightback underlined the growing belief in this Bulgaria side, who remain two points behind section leaders Romania. Belarus, meanwhile, saw their slender qualifying chances all but ended though expectations would have been high when Vasilyuk secured a dream start. This only served to awaken the home team from their torpor, however, and the deficit lasted just five minutes before Hristo Yovov was brought down 25 metres from goal. Ever the Bulgaria talisman, Martin Petrov fired in the free-kick and from then on, there was one likely winner.

Rubber-stamped
Yankov put the local favourites in the box seat before the interval, collecting Dimitar Telkiyski's pass and shooting past Yuri Zhevnov. There would be no way back for the visitors, although Ivankov was tested by a header from substitute Vitali Kutuzov midway through the second period. At the other end, Martin Petrov almost made it 3-1 with another set-piece late on and if this time Zhevnov was equal to it, it mattered not as Bulgaria claimed back-to-back wins.