Madrid duo do the Netherlands proud 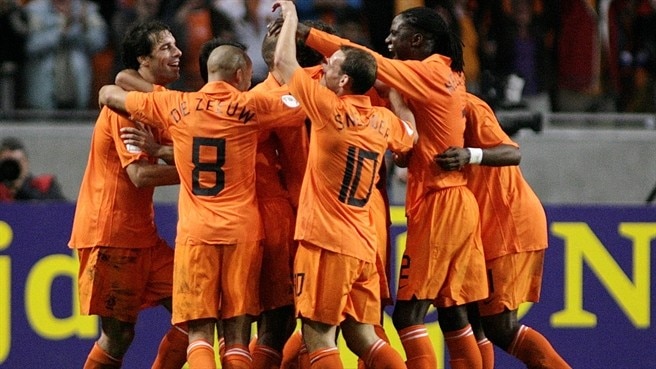 Madrid duo do the Netherlands proud

Vital win
Romania's 3-1 win in Belarus earlier in the day had kept them at the group summit, as one of three undefeated teams alongside tonight's opponents in Amsterdam. So the eventual Dutch victory not only preserved their status but also lifted them into a qualifying position, two points above Bulgaria with a game in hand.

Tactics pay off
Oranje coach Marco van Basten had opted for an adventurous three-pronged attack of Robin van Persie, Ryan Babel and Van Nistelrooy, the third-mentioned making his first competitive appearance since the FIFA World Cup. It was his club-mate Sneijder who broke the deadlock though, replicating his fine form for Madrid since his summer move from AFC Ajax with a 20-metre free-kick into the bottom left-hand corner, to mark a happy return to the Amsterdam ArenA.

Doubling up
Bulgaria, in their first group game since Dimitar Penev's comeback as coach, were having little joy up front – they did not have a real chance until early in the second half when Dimitar Berbatov's shot fizzed wide. The Netherlands duly doubled their lead when Babel's cross found Van Nistelrooy, who celebrated his return to the side by sweeping a shot past goalkeeper Dimitar Ivankov and into the bottom corner.

Wednesday trip
Although Clarence Seedorf, a late substitute for Sneijder, rattled the Bulgaria woodwork in the 77th minute, the 2-0 scoreline was sufficient and the Dutch remain within three points of Romania. It is a gap they can close on Wednesday when they visit Albania with the leaders not in action. Bulgaria will attempt to revive their campaign at home to Luxembourg.