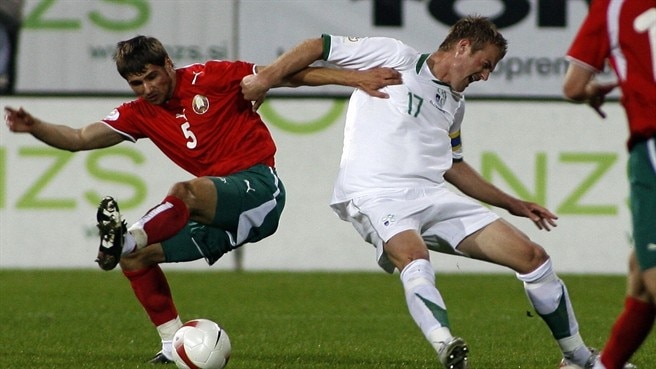 Slovenia had to resist a brave second-half display from ten-man Belarus to secure a 1-0 Group G win in Celje.

Lavrič penalty
An early penalty from Klemen Lavrič earned the points while Belarus had Artyom Radkov sent off for two bookable offences inside two second-half minutes. Pavel Plaskonny fouled Lavrič inside the box to give the home side their penalty three minutes into the match; the striker took the responsibility, planting a firm shot past Vladimir Gaev for his fourth goal of the qualifying campaign.

Under pressure
Valter Birsa was next to try his luck for the hosts, his speculative effort from 20 metres drifting past the left upright. Dalibor Stevanovič also set his sights from distance but his shot was well claimed by Gaev. Belarus were struggling to deal with the Slovenia wide men, Birsa and Andraž Kirm; it was Kirm who gave them a scare as he cut in from the left and let fly a strike from the corner of the area that grazed the bar.

Closer contest
Belarus began to threaten themselves through Timofei Kalachev, whose runs down the right and centre were troubling the home defence. First he had an attempt on goal which soared over the woodwork before his cross caused Slovenia to concede a throw-in in their danger zone. That found Sergei Kornilenko whose low shot was smothered by Slovenia No1 Samir Handanovič at his near post.

Captain sent off
Although Radkov was dismissed on 70 minutes for two fouls in quick succession, his team continued to push forward and nearly equalised when Dare Vršič brought down Kalachev on the edge of the box; Vladimir Korythko's free-kick being adeptly saved by Handanovič. Slovenia's Milivoje Novakovič then struck the bar against the run of play as his side held on for a victory which takes them three points clear of their opponents, into fourth place in the pool.