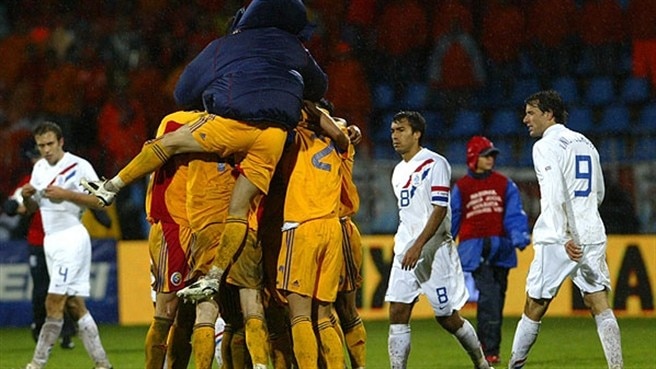 Dorin Goian's goal gave Romania a narrow victory against the Netherlands which took Victor Piturca's side three points clear of their opponents at the top of UEFA EURO 2008™ qualifying Group G.

Opportunist finish
The FC Steaua Bucureşti defender tapped in with 19 minutes remaining at the Farul Stadium in Constanta, capitalising after Netherlands goalkeeper Maarten Stekelenburg had palmed out Paul Codrea's header. The win takes Romania to 23 points with three games to play; their next fixture comes in Luxembourg on Wednesday, when the Dutch host Slovenia.

Cautious opening
The opening 20 minutes were a cagey affair, with neither team willing to commit men forward and both content to try their luck from long range. Demy de Zeeuw's drive flew just too high for the visitors while Cristian Chivu's free-kick flashed centimetres wide of Stekelenburg's right-hand post. The first genuine chance was carved out by the Oranje though, when Rafael van der Vaart's left-wing corner was met by Wilfred Bouma whose header clipped the top of the crossbar.

Goalkeepers in action
Again, Marco van Basten's men might have taken the lead in the 34th minute but goalkeeper Bogdan Lobont was equal to Ruud van Nistelrooy's smart shot after the striker had turned cleverly inside the area. Romania began the second half at a livelier tempo, however, and Stekelenburg was called upon to make an acrobatic save to touch over a dipping long-distance shot from Adrian Mutu.

Goian glee
The keeper was finally beaten in the 71st minute when Chivu's left-wing free-kick was flicked on by Codrea – although Stekelenburg brilliantly saved the midfielder's effort, the ball fell kindly for Goian to prod in. The Netherlands pressed forward in search of an equaliser and almost found one in the final seconds. Lobont could only punch Clarence Seedorf's set-piece as far as the lurking Van der Vaart, who placed his shot past the keeper only for the outside of the upright to come to Romania's rescue.