Slovenia and Albania draw a blank

Published: Sunday 14 October 2007, 0.27CET
Slovenia 0-0 Albania The home side stayed one point clear of their opponents in the table after this goalless draw in UEFA EURO 2008™ qualifying Group G. 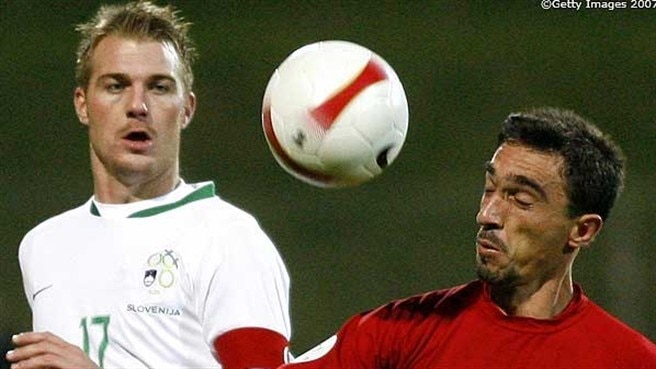 Slovenia and Albania draw a blank

Slovenia 0-0 Albania The home side stayed one point clear of their opponents in the table after this goalless draw in UEFA EURO 2008™ qualifying Group G.
Read more

Slovenia and Albania played out a goalless draw in UEFA EURO 2008™ qualifying Group G – a result that keeps the home side one point above their opponents in the table.

Stalemate
With qualification for the finals out of reach for both teams before kick-off, neither side threatened the opposition goal on a regular basis with most of the danger coming from long-range efforts and set-pieces.

Best moments
Slovenia's captain Klemen Lavrič, who had scored three times in the last two qualifiers, came closest to breaking the deadlock in the first half with a deflected header from a free-kick, but this was easily held by visiting keeper Arian Beqaj. Albania's best moment of the opening period had come earlier, when a promising move down the right resulted in an Erion Bogdani shot which was comfortably collected by Slovenia stopper Samir Handanovič.

Goalkeepers untroubled
The second half followed a similar pattern to the first with both custodians being largely untroubled as the two teams laboured to create clear-cut openings. Albania's Klodian Duro tried to make an impact with an attempted overhead kick from six metres yet he failed to make sufficient contact to worry Handanovič.

Late chances
Beqaj warmed his hands at the other end of the pitch minutes later, parrying to safety Valter Birsa's free-kick for Slovenia, while Albania's Nevil Dede curled the ball wide from Ervin Skela's outswinging corner three minutes from time. However, neither side could do enough to merit a goal and the result replicated the first meeting between these countries in qualifying – another stalemate.