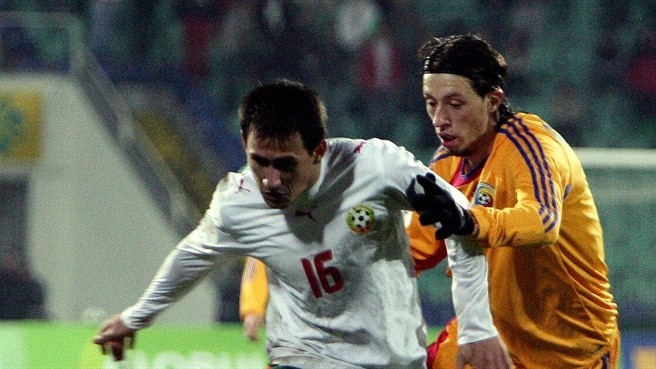 Bulgaria's Zhivko Milanov gets away from Ovidiu Petre ©Getty Images

Lifeline
Dimitar Penev's team kept their first part of the bargain, ahead of their final qualifier in Slovenia on Wednesday, thanks to Dimitrov's sixth-minute header. However, second-placed the Netherlands remained one point above Bulgaria with two matches to play.

Wasteful Romania
Romania, who had booked their EURO ticket last month, went into this game unbeaten and squandered first-half chances for Bănel Nicoliţă, Daniel Niculae and Cristian Chivu. Consequently, the home side entered the interval still buoyed by the strike from the PFC CSKA Sofia midfielder. Martin Petrov was the architect, whipping over a left-wing cross which Dimitrov nodded high past Romania keeper Bogdan Lobont.

Bulgaria prevail
The second half saw further opportunities for the visitors, with Niculae particularly wasteful. But Bulgaria might have doubled their advantage as first Stilian Petrov drew a save from Lobont and then greedily failed to tee up Dimitar Berbatov from close range. Late on Berbatov did what Petrov had been unable to do, yet his square ball across the box was completely missed by the onrushing Dimitrov. Berbatov himself was culpable moments later when firing wide from Hristo Yovov's cross.