Published: Wednesday 21 November 2007, 23.59CET
Belarus 2-1 Netherlands
Vitali Bulyga and Vladimir Korythko scored against the Oranje as Belarus had an uplifting evening in Minsk. 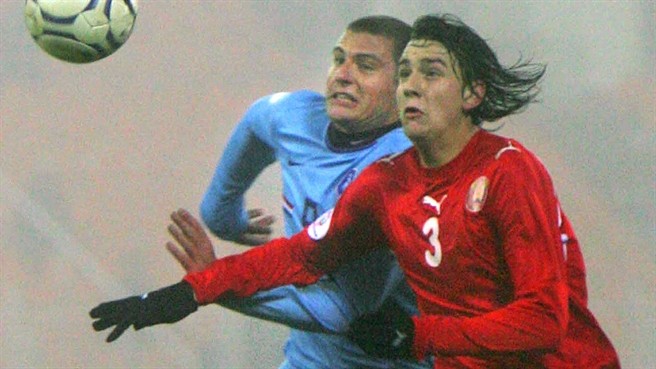 Belarus 2-1 Netherlands
Vitali Bulyga and Vladimir Korythko scored against the Oranje as Belarus had an uplifting evening in Minsk.
Read more

Second-half goals from Vitali Bulyga and Vladimir Korythko ensured Belarus ended their UEFA EURO 2008™ campaign with a famous win against the Netherlands in Minsk.

Qualification assured
The visitors had secured their place at next summer's finals with a 1-0 weekend defeat of Luxembourg, but this result left Marco van Basten's side in second place in Group G behind Romania. Belarus, meanwhile, climbed from sixth position at kick-off to fourth on 13 points, two above Albania and Slovenia.

Enterprising opening
The Netherlands started strongly at the Dinamo Stadium, with Danny Koevermans and Ryan Babel both missing the target when well-placed although visiting keeper Maarten Stekelenburg had to parry a Korythko shot and Aleksandr Hleb fired wide. It was Van Basten's team though – who had scored only 14 goals in their eleven fixtures, one less than their opponents – who were creating the better openings. Yegor Filipenko blocked another Babel effort, while Rafael van der Vaart and Wilfred Bouma tried their luck from distance.

Belarus in front
Maksim Romashchenko served notice of Belarus's threat in the closing seconds of the first period, and the Netherlands failed to heed the warning. The Oranje duly fell behind four minutes into the second half as Bulyga collected Korythko's through ball and slid a low shot past Stekelenburg. Although Giovanni van Bronckhorst and Van der Vaart hinted at an equaliser, Aleksei Skverniuk's powerful long-range drive almost doubled the hosts' lead and a second goal was not long in arriving. It was Korythko who curled it in from the edge of the area following Bulyga's pass.

Superb finish
Koevermans and Van der Vaart both spurned half-chances and the luckless Babel struck the crossbar, yet it was not until the 89th minute that the Netherlands finally unpicked the Belarus defence. Van der Vaart produced a superb finish, neatly chipping Yuri Zhevnov for a consolation goal as Bernd Stange's men held on for a morale-boosting victory.