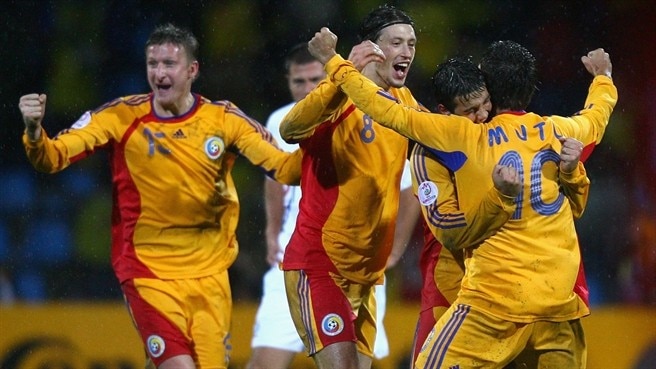 Romania 6-1 Albania
The hosts finished their qualifying campaign with a flourish against nine-man Albania to top Group G.
Read more

Romania completed their UEFA EURO 2008™ qualifying campaign in style with a comprehensive victory over nine-man Albania to finish top of Group G.

Second-half rout
After taking a first-half lead through Nicolae Dică, Romania scored five goals in a 20-minute second-half spell. Gabriel Tamas put the home side 2-0 up on 53 minutes before Debatik Curri was dismissed. Daniel Niculae added Romania's third and though substitute Edmond Kapllani pulled one back for Albania, Romania countered with further strikes from Niculae, Ciprian Marica and Dică, who registered his second from the penalty spot after Nevil Dede had been shown a second yellow card for bringing down Marica.

Tamas strikes
Romania started well and their pressure told on 22 minutes when Razvan Cocis crossed from the right to Dică who converted from close range. Albania almost equalised at the beginning of the second half when Kapllani centred for Erion Bogdani, but his attempt was superbly saved by Bogdan Lobont. Romania doubled their lead shortly after when Tamas drilled a low free-kick from 30 metres through a crowded area and into the bottom right corner.

Curri off
Albania's problems intensified on 61 minutes when Curri was sent off for a foul on Marica and three minutes later, before Albania could regroup, Dică chipped towards the far post where an unmarked Niculae shot powerfully into the roof of the net. Almost straight from the restart Albania gave themselves a glimmer of hope when Altin Haxhi played the ball into substitute Kapllani on the edge of the box and he turned his marker before finishing well.

Group winners
Romania, however, extinguished that hope in ruthless fashion on 66 minutes. Cocis broke down the right and laid the ball across for Niculae to tap in. With 19 minutes remaining, Dede impeded Răzvan Raţ and Marica sent goalkeeper Arian Beqaj the wrong way to make it 5-1. Two minutes later Dede was penalised again for another foul in the area on Marica. Dede was red-carded and Dică stepped up to fire in the penalty. Romania top their group on 29 points, three above the Netherlands, as Victor Piturca's men progressed to their first major tournament since UEFA EURO 2000™. The match was the last to be played at Bucharest's Lia Manoliu Stadium, which will be demolished to make way for a new five-star arena to be opened in April 2010.