Bulgaria leave it late for victory 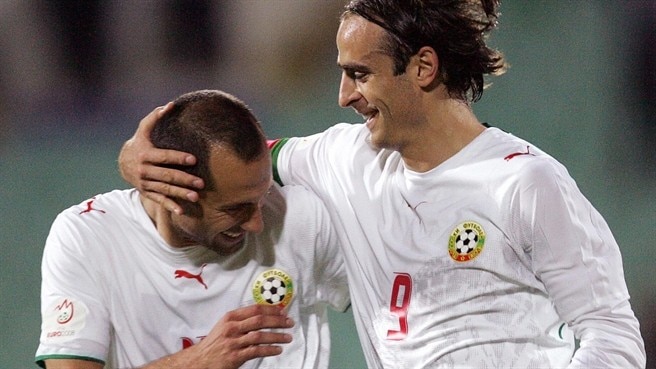 Dimitar Berbatov (right) was on target for Bulgaria ©Getty Images

Bulgaria leave it late for victory

Late goals from Blagoy Georgiev and Dimitar Berbatov ensured Bulgaria ended their UEFA EURO 2008™ campaign with a victory that left them one point off the qualifying places.

Jokič dismissed
Romania and the Netherlands had already secured the two available berths from Group G, with Bulgaria's hopes being finally extinguished last Saturday. Slovenia were reduced to ten men when Bojan Jokič was dismissed moments before half-time and Bulgaria eventually wore down the hosts to seal victory with two goals in the final nine minutes.

Early chances
Both sides had chances in the early stages. Slovenia goalkeeper Samir Handanovič did well to collect Velizar Dimitrov's early header after he had connected with Martin Petrov's cross. At the other end, Andraž Kirm's shot was blocked by Zhivko Milanov and Jokič's long-range effort was kept out by goalkeeper Dimitar Ivankov. Klemen Lavrič's overhead kick following a corner also came close.

Handanovič saves
The momentum swung Bulgaria's way shortly before half-time when Jokič was sent off for pulling back Hristo Yovov as he bore down on goal. Handanovič easily dealt with Martin Petrov's subsequent free-kick, but Bulgaria would ultimately make their advantage tell.

Late flurry
Early in the second half Handanovič saved Yovov's angled shot then kept out Aleksandar Tunchev's header as the visiting team pressed. On 81 minutes Bulgaria finally made the breakthrough as Georgiev put his side in front with a volley. The points were made safe three minutes after that when Berbatov converted from close range after good play from Dimitrov.