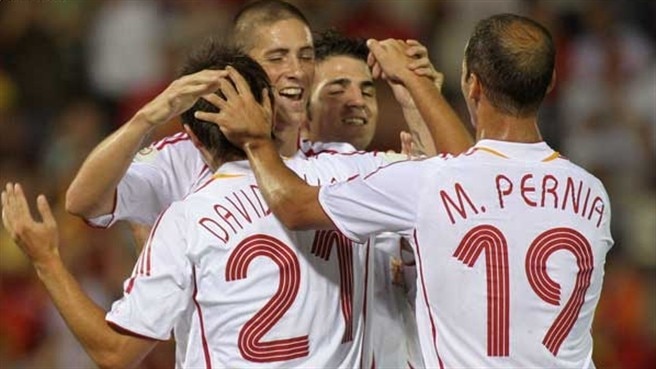 Attacking tactics
Luis Aragonés deployed a predictably positive 4-3-3 formation with Torres and Villa alongside Raúl González and within seconds Spain had nearly scored; left-back Mariano Pernía's shot from close range being blocked by visiting keeper Peter Jehle. The breakthrough eventually arrived in the 20th minute as Villa found Torres who fired powerfully into the top corner from eleven metres. The hosts continued to dominate and doubled the lead just before the break through Villa's right-footed strike.

Points secure
There was little change to the pattern of the game in the second half and not long before the hour, Torres's header forced Jehle to save. The keeper was beaten soon after as Villa drove in from the centre of the area. García was sent on for Villa and swiftly added a fourth as he turned in Pernía's cross from the left. Spain could afford to ease off and on Wednesday go to Northern Ireland, who suffered a 3-0 home defeat by Iceland today. Liechtenstein, who secured an impressive eight points in FIFA World Cup qualifying, have another tough trip to Sweden, victors in their opener in Latvia.