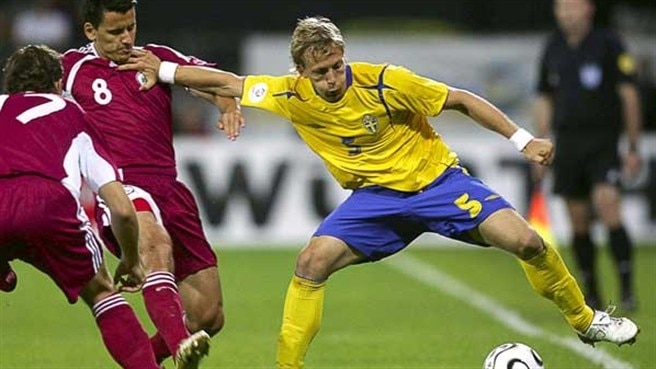 Sweden got their UEFA EURO 2008™ campaign off to a solid start with a 1-0 victory in Latvia in qualifying Group F. Kim Källström scored the only goal with a fine shot after 38 minutes as Lars Lagerbäck's side avenged their UEFA EURO 2004™ defeat in Stockholm with a deserved win.

Shaaban shines
Lagerbäck welcomed back key players Zlatan Ibrahimović, Fredrik Ljungberg and Olof Mellberg following last month's friendly loss to Germany. However, injury deprived the Swedes of first-choice goalkeeper Andreas Isaakson and his replacement, Rami Shaaban, was one of the star performers early on. He produced excellent stops from long-range efforts from Andrejs Rubins and Andrejs Prohorenkovs as Latvia started the brighter.

Källström strikes
Sweden soon seized the initiative, though, with FC København midfielder Tobias Linderoth orchestrating a sustained spell of dominance. The pressure paid off with Källström's superb strike. The goal came after Aleksandrs Kolinko had saved from Ibrahimović and Johan Elmander saw his follow-up attempt cleared off the line - Källström showing great composure to fire home from just inside the area with his right foot.

Vital win
Sweden continued to look the better side in the second half but chances were at a premium. Although Latvia eventually pressed for an equaliser, the visitors held on for three vital points. They will hope to double that tally on Wednesday when they welcome Liechtenstein. Latvia's next engagement is not until October when they entertain group leaders Iceland.