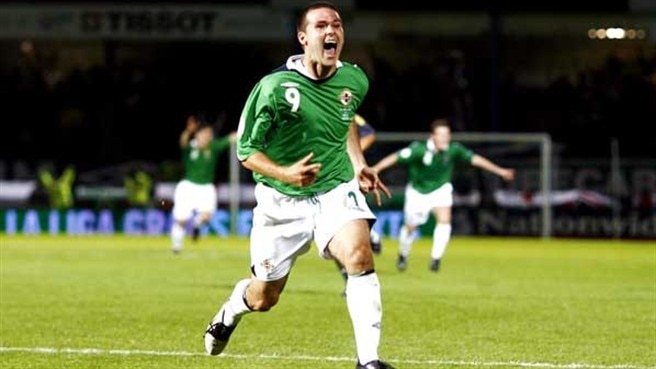 David Healy sealed a famous victory against Spain by becoming the first Northern Ireland player in 15 years to score a hat-trick.

Stunning success
The Leeds United AFC striker was on the mark once in the first half and twice in the second period to stun one of football's top nations in Belfast. Fittingly this stunning success came on the eve of the anniversary of last year's triumph against England, which was equally unlikely. Healy got the winner that night and has scored 23 goals in 52 games for his country.

Xavi opener
The night began badly for the hosts with Roy Carroll, making his first start since October 2004, lasting only eleven minutes before he pulled up after making a clearance and was replaced by Maik Taylor. Three minutes later Taylor was picking the ball out of his net as Spain registered their 1,000th goal through Xavi Hernández. He got on the end of a cross from Antonio López to thump a shot into the corner.

Spanish rattled
Coming in the wake of last weekend's home loss to Iceland, Northern Irish morale might have collapsed; instead, the home side regrouped and equalised in the 20th minute when Healy pounced on a mistake by Xabi Alonso to score from close range. Spain, clearly rattled, made a change in the 29th minute as Arsenal's Cesc Fabregas came on for the injured David Albelda. The teenager powered in an effort in the 35th minute that was deflected to safety and Xabi Alonso then went close before Northern Ireland debutant Kyle Lafferty nodded over moments before half-time.

Second equaliser
Four minutes after the restart, Lafferty threatened again but mishit his attempt when clean through. It looked a costly miss when Spain went back in front in the 52nd minute through David Villa after a neat through-ball from Fabregas. However, Northern Ireland showed their fighting spirit as they equalised again in the 64th minute. Sammy Clingan shaped to play a free-kick from the right into the box but instead sent it short to Healy, who reacted superbly to drive into the corner.

Cool finish
There was another scare for Northern Ireland in the 74th minute when Raúl González's shot came back off the post. Incredibly Healy then sealed the points for the Northern Irish in the 80th minute when he completed his hat-trick with a cool finish. He lobbed the ball over Iker Casillas after a long clearance from Taylor to become the first Northern Ireland player since Colin Clarke in 1991 to get a treble.