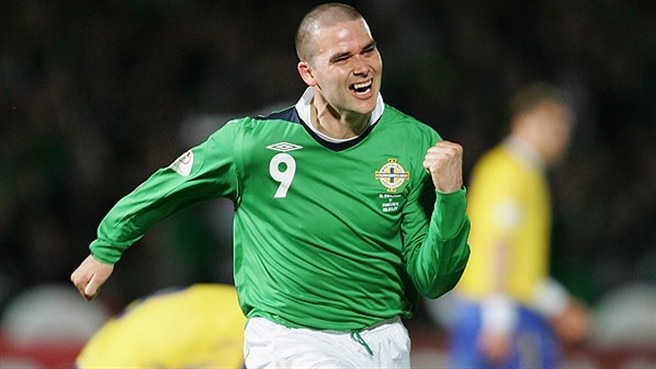 David Healy scored twice for Northern Ireland as they stormed to the top of Group F after coming from behind to beat Sweden in Belfast.

Perfect record
Sweden were on course to maintain their 100 per cent record in the group when Johan Elmander gave them a first-half lead, but Healy equalised shortly after and then completed the turnaround early in the second half to give Lawrie Sanchez's side their third straight qualifying win.

Sweden breakthrough
Neither team was able to gain the upper hand in the early exchanges with both goalkeepers largely redundant until midway through the half, when two goals in quick succession opened up the contest. Sweden were the first to strike on 26 minutes as Niclas Alexandersson's cushioned header from an Anders Svensson cross allowed Elmander to turn sharply and thump his shot past Maik Taylor.

Defensive confusion
However, Northern Ireland's response was immediate and emphatic. Just five minutes later Sweden defenders Olof Mellberg and Petter Hansson went for the same ball and when it dropped to Healy, the Leeds United AFC striker sent a dipping half-volley over Andreas Isaksson from 25 metres.

Neat finish
The visitors upped the tempo after the break and nearly regained the advantage on 54 minutes when Zlatan Ibrahimović met Alexandersson's corner with a downward header but Grant McCann was on hand to clear off the goalline. And four minutes later, Northern Ireland turned the tie on its head as Damien Johnson whipped in a cross from the touchline and Healy clipped a shot into the corner from close range.

Late onslaught
Sweden replied with a barrage on the hosts' goal. Christian Wilhelmsson volleyed straight at Taylor from 20 metres, then Elmander's cross was cracked against his own post by Stephen Craigan. Fredrik Ljungberg volleyed over when well placed, before the same player slipped in Elmander only for Taylor to deflect his effort past the post. There was still time for Isaksson to deny Healy his third hat-trick of the campaign as the Northern Irish held on for another famous victory.