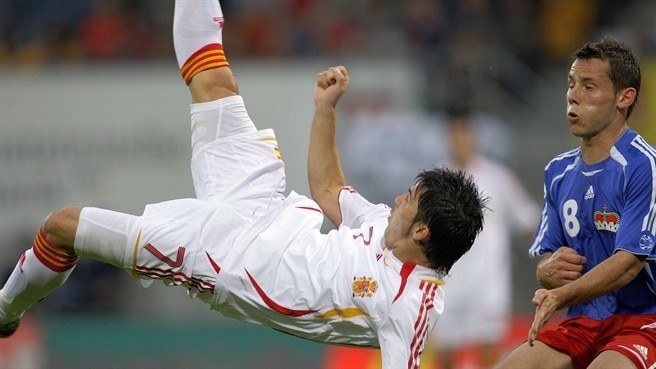 Spain eased into the qualifying berths at the top of Group F after two David Villa goals earned a comfortable 2-0 victory over Liechtenstein in Vaduz. The Valencia CF striker put the visitors in firm control by scoring twice inside the first 14 minutes - raising his total to seven in seven qualifers - but spurned the chance of a hat-trick by missing an injury-time penalty.

Fourth straight win
Luis Aragonés, the Spain coach, had announced before the game that he would be stepping down at the conclusion of his side's UEFA EURO 2008™ campaign. He expects this will be in Austria and Switzerland next summer and the likelihood of Spain reaching the finals increased here in the neighbouring Alpine principality of Liechtenstein, their fourth straight win lifting them into second place in Group F.

Early breakthrough
Villa broke the deadlock when Cesc Fabregas threaded the ball between two blue-shirted defenders and the little No7 carried it around goalkeeper Peter Jehle before converting. He doubled the lead with a superb overhead kick, finishing acrobatically after Valencia colleague David Silva had crossed from the left.

Damage limitation
Liechtentenstein had gone into this match buoyed by a draw in Iceland last weekend and they gave their fans brief hope of an equaliser to Villa's opener when Michele Polverino warmed Pepe Reina's hands with a fiercely struck drive. However, it quickly became an exercise in damage limitation for the hosts. Sergio Ramos headed narrowly wide shortly before the half-hour, then Andrés Iniesta struck the side-netting after captain Joaquín Sánchez had put him through.

Spanish profligacy
Spain's supremacy was such that at times they were guilty of trying to walk the ball into the net. Although Liechtenstein's Franz Burgmeier curled a shot against the angle of post and crossbar just after the hour, it was otherwise one-way traffic. Substitute Luis Garcia missed an open goal while Villa wasted several clear opportunities of a hat-trick, notably by crashing a late penalty against the bar. As it was, Spain, who will resume their campaign in Iceland in September, had to settle for 2-0.