Published: Thursday 7 June 2007, 0.39CET
Sweden 5-0 Iceland Sweden will go into the summer break top of Group F after easing to a convincing defeat of Iceland in Solna. 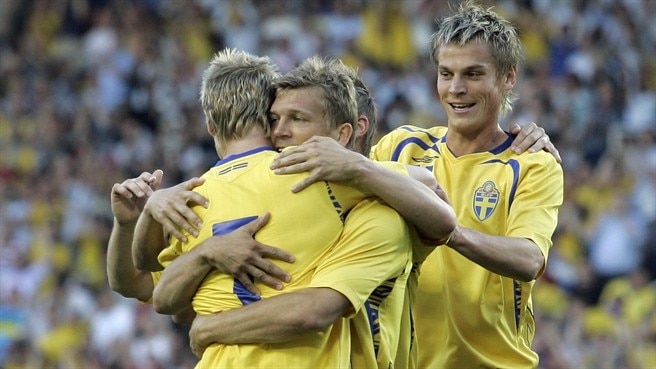 Sweden 5-0 Iceland Sweden will go into the summer break top of Group F after easing to a convincing defeat of Iceland in Solna.
Read more

Sweden go into the summer break top of UEFA EURO 2008™ qualifying Group F after a convincing defeat of Iceland.

Strong position
After the drama of their match in Denmark on Saturday, it was a calmer affair for Sweden tonight as two Marcus Allbäck goals and one each from Anders Svensson, Olof Mellberg and Markus Rosenberg left them in a strong position to reach the finals next year. Iceland, held at home by Liechtenstein at the weekend, remain sixth.

Opening goal
The home side were without suspended forward Johan Elmander, who netted twice in the abandoned 3-3 draw in Copenhagen, while Iceland had even bigger problems in attack with star striker Eidur Gudjohnsen also serving a ban, and the visitors struggled from the start. Sweden's breakthrough came after just eleven minutes courtesy of Allbäck. Árni Arason did well to parry an initial strike from Tobias Linderoth but the ball only went as far as Rosenberg, who touched it on to Allbäck to shoot in on the half-volley.

Lead increases
Although Sweden continued to have the best of the play, it was not until shortly before the interval that Svensson doubled their advantage, netting from ten metres after Christian Wilhelmsson's corner had caused panic in the Iceland defence. Lars Lagerbäck's men then made it 3-0 on the stroke of half-time thanks to Mellberg, who powered in Niclas Alexandersson's centre with a little help from the post. Five minutes after the restart Rosenberg got in on the act, beating the offside trap before lobbing Arason from 12 metres. The visiting rearguard was breached again a minute later by Allbäck, leaving Sweden well-placed for the arrival of Denmark on 8 September, when Iceland welcome Spain.