Published: Sunday 9 September 2007, 0.30CET
Sweden 0-0 Denmark The home side stayed on course to reach the finals with a goalless draw that took them three points clear in qualifying Group F. 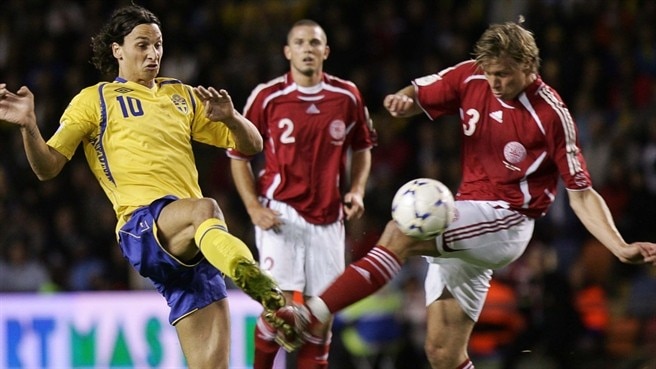 Sweden 0-0 Denmark The home side stayed on course to reach the finals with a goalless draw that took them three points clear in qualifying Group F.
Read more

Chances at both ends
After the reverse fixture in Copenhagen in June had been awarded to Sweden, as a 3-0 victory, following a pitch invasion by a Denmark fan, both sides had chances to win tonight's game at the Råsunda Stadium in Solna. Johan Elmander and Zlatan Ibrahimović went close for Sweden while Daniel Agger, Martin Laursen and Jon Dahl Tomasson threatened for the visitors. Sweden now have 19 points from eight outings, eight more than the Danes who next play Liechtenstein on Wednesday. Sweden return to action on 17 October with an away match against the same opposition.

Sweden on top
Sweden started the brighter, Elmander heading over an Anders Svensson cross and also sending a shot over the crossbar, while at the other end Olof Mellberg blocked Tomasson's weak attempt. Denmark midfielder Thomas Kahlenberg then got in the way of Petter Hansson's goalbound free-kick after Elmander had been fouled, before Laursen stopped Christian Wilhelmsson's strike and goalkeeper Thomas Sørensen tipped Elmander's header from an Ibrahimović cross over.

Goalkeepers excel
Svensson was next to draw a save from the Denmark goalkeeper with an angled drive, which finally stung Morten Olsen's men into action: Agger subsequently meeting a corner to force a save from Sweden's Andreas Isaksson, who then had to keep out a Daniel Jensen effort from distance. The away team continued to press as Tomasson put a shot and a header over before Isaksson dealt comfortably with a Leon Andreasen attempt. Kennedy Bakircioglü and Svensson next tried their luck from long range as Sweden chased a winner. However, after Ibrahimović had squandered two late opportunities, both sides had to settle for a point.