Published: Thursday 13 September 2007, 0.35CET
Spain 2-0 Latvia A goal in each half got Spain's campaign back on track as they moved into the top two positions in Group F.
by Lucy Turner 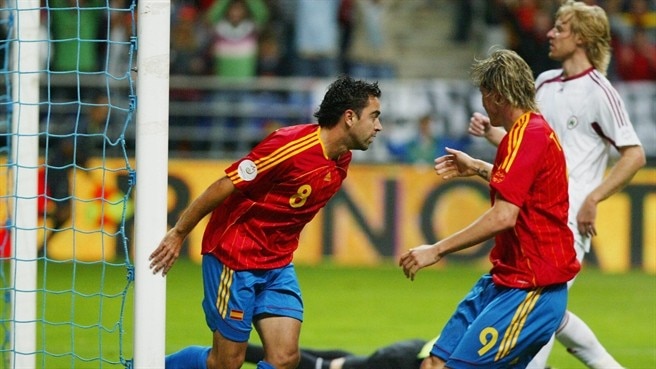 Spain 2-0 Latvia A goal in each half got Spain's campaign back on track as they moved into the top two positions in Group F.
Read more

A goal in either half from Xavi Hernández and Fernando Torres got Spain's qualifying campaign back on track as they returned to the top two places in Group F, level on points with Sweden.

Key victory
Spain had suffered a setback to their UEFA EURO 2008™ prospects when they drew 1-1 in Iceland last Saturday, but Northern Ireland's defeat in Reykjavik played into their hands and Luis Aragonés's side took advantage with this victory in Oviedo. Xavi broke the deadlock on 13 minutes to settle the hosts' nerves and Torres's effort four minutes from time ensured Spain moved to 19 points alongside leaders Sweden, who have a game in hand, three points ahead of Northern Ireland.

Xavi celebration
Determined to improve on Saturday's showing, Spain began on the offensive and their efforts were rewarded when Xavi celebrated his 50th cap with the opening goal. Joaquín Sánchez delivered a superb cross from the flank and the FC Barcelona midfielder nudged the ball beyond goalkeeper Andris Vanins. Just after the half-hour it was almost 2-0, David Villa directing a free header wide after rising unmarked at a corner. He was almost punished at the other end four minutes later when former Getafe CF striker Maris Verpakovskis got on the end of a quick counterattack, missing Latvia's best chance of the match.

Iniesta influence
Four minutes into the second half Joaquín was left cursing his luck after his shot was deflected on to the woodwork by defender Kaspars Gorkss. Substitute Andrés Iniesta then elicited a fine stop from Vanins eleven minutes after the restart. The hosts struggled to break down an obdurate Latvia defence yet the points were finally sealed when Iniesta began a move that saw Miguel Ángel Angulo bring a save out of Vanins and Fernando Torres follow up to score.