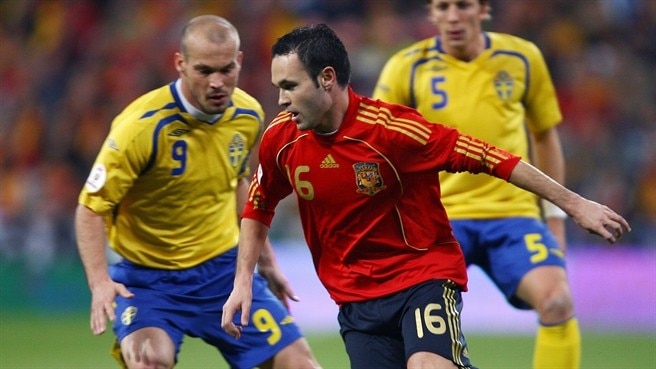 Spain secured their berth at UEFA EURO 2008™ with an impressive 3-0 victory over Sweden in Madrid.

Comfortable win
A 65th-minute Sergio Ramos strike followed first-half goals from Joan Capdevila and Andrés Iniesta to put Spain top of Group F, two points above Sweden who need a point from their final game at home to Latvia to confirm qualification.

Early breakthrough
Spain made the early running at the Santiago Bernabéu but neither side had even a half-chance before the hosts took the lead through full-back Capdevila, who volleyed home in the 14th minute following a Xavi Hernández corner. David Villa almost doubled the advantage after half an hour when his low free-kick thudded against the post with Sweden goalkeeper Andreas Isaksson beaten.

Lead doubled
However, Spain did make it two in the 39th minute, when Iniesta latched on to a Capdevila lay-off before smashing a left-footed effort into the top corner. Zlatan Ibrahimović thought he had reduced the deficit for the visitors soon after, yet his celebrations were cut short by an offside flag. Luis Aragonés's team, who had lost the corresponding fixture 2-0 in Sweden, continued to dominate after the break and Xavi and Cesc Fabregas both shot narrowly over.

Home comforts
Real Madrid CF defender Ramos added the third on his home ground when he volleyed the ball in after Capdevila's attempt had been cleared off the line. Spain were now cruising and they had chances to enhance the scoreline in the closing stages before the final whistle sparked celebrations. Lars Lagerbäck's Sweden will join them in Austria and Switzerland next summer should they get the required result against Latvia on Wednesday.