Published: Wednesday 21 November 2007, 23.55CET
Denmark 3-0 Iceland
The home side ended a mixed Group F campaign on a high note as three goals in 25 minutes saw off Iceland in Copenhagen. 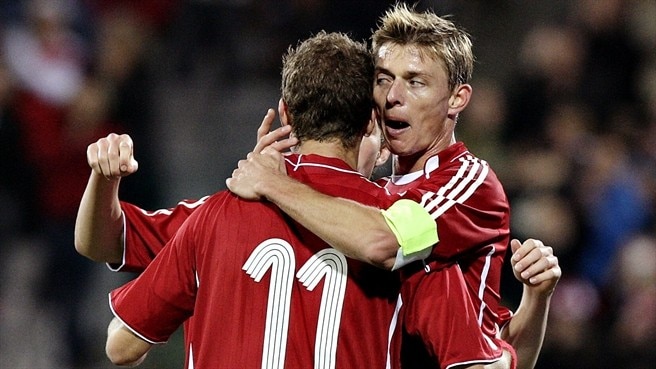 Denmark 3-0 Iceland
The home side ended a mixed Group F campaign on a high note as three goals in 25 minutes saw off Iceland in Copenhagen.
Read more

Denmark rounded off in style a mixed UEFA EURO 2008™ qualifying campaign as goals from Nicklas Bendtner, Jon Dahl Tomasson and Thomas Kahlenberg earned a 3-0 triumph against Iceland in Copenhagen.

Bendtner opener
With only pride to play for, this Group F dead rubber could have seen both teams going through the motions, but Denmark instilled early urgency and got their reward with three goals in a 25-minute period either side of half-time. Bendtner broke the deadlock on 34 minutes as he collected a Christian Poulsen pass and fired beyond Árni Arason and Tomasson made it 2-0 just before half-time. There was no way back for Iceland, whose disappointing campaign was compounded by Kahlenberg's strike seconds before the hour.

Killer blow
It sealed a victory that had always seemed likely as the hosts drove forward from kick-off. Poulsen and Bendtner both went close before Daniel Jensen forced an Arason save as Morten Olsen's charges displayed greater purpose. Bendtner finally made the breakthrough eleven minutes before the interval and although Iceland rallied, with Veigar Páll Gunnarsson firing over, Tomasson hit a killer blow from close range on 44 minutes. Kahlenberg made it three following good work from Bendtner and the winning margin could have been more emphatic had Ulrik Laursen and substitute Simon Poulsen not been denied.