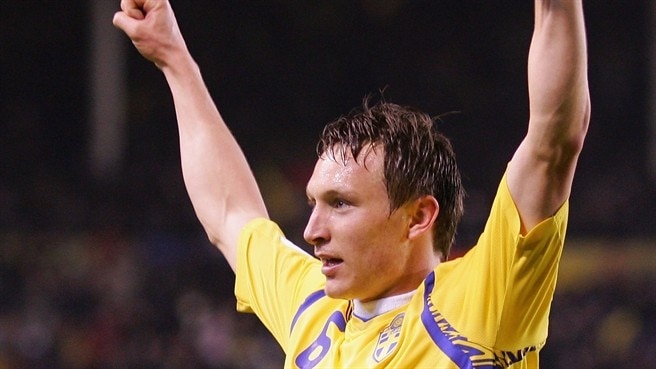 Perfect start
A Northern Ireland win in Spain in the night's other Group F match coupled with a Sweden defeat would have cost Lars Lagerbäck's side a place in Austria and Switzerland, but there was little chance of that as Sweden pressed forward from the start. Marcus Allbäck opened the scoring within a minute of kick-off, and though Swedish hearts were in mouths when Jurijs Laizans equalised after 26 minutes, Källström made sure of the points 12 minutes into the second half.

Laizans equaliser
Sweden enjoyed the perfect opening when Zlatan Ibrahimović crossed from the right for Allbäck to head in from close range. Latvia were being pinned back in their own half and Källström came close again before Ibrahimović fired wide. At the other end, Laizans twice served notice of his danger, first shooting wide from 20 metres, then bringing a fine save from Sweden goalkeeper Andreas Isaksson. Sweden would be breached before the half-hour though, as Laizans' deflected effort gave the sprawling Isaksson no chance.

Missed chances
The hosts hit back, subjecting Latvia's defence to wave after wave of attacks, but Mikael Nilsson and Källström both missed when presented with good opportunities. Sweden picked up where they had left off after the restart, continuing to squander presentable chances, with Ibrahimović and Allbäck both wayward from close range in quick succession.

Källström winner
The pressure finally told on 57 minutes. Fredrik Ljungberg on the right passed to Källström, who swept the ball in left-footed from 20 metres. Sweden had further invitations to add to their advantage, but two goals would be enough to make sure of a place in Austria and Switzerland.