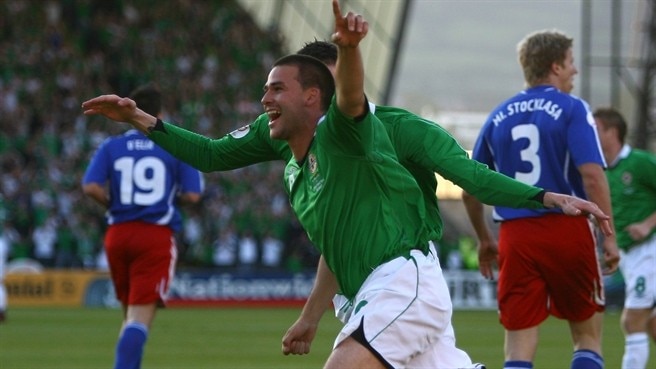 David Healy was the main man in Belfast ©Getty Images

Northern Ireland moved to within striking distance of Group F leaders Sweden after David Healy inspired them to a 3-1 victory against Liechtenstein in Belfast.

Winning start
The in-form Fulham FC striker did much to make sure Nigel Worthington got off to a winning start in his first match in charge of a Northern Irish side who sit two points behind Sweden after seven games apiece. Healy's two goals mean he has scored an unrivalled eleven times in this qualifying campaign, and 31 overall in 57 internationals. Kyle Lafferty added the third with Liechtenstein scoring a late consolation through Mario Frick.

Early opener
It took Healy just five minutes to make the breakthrough, latching on to Keith Gillespie's cross to head in. The hosts had a scare in the 18th minute when Frick powered in a header that had home goalkeeper Maik Taylor scrambling. Healy then took advantage of a mistake by Michael Stocklasa to add a second goal from long range in the 35th minute. It was 3-0 just before the hour as the recalled George McCartney overlapped on the left and crossed for Lafferty to finish in style.

Sloppy play
Liechtenstein, who had taken four points from their previous two qualifiers, were rewarded for their hard work at Windsor Park a minute from time when Frick pulled a goal back after some sloppy defensive play. The points went to Northern Ireland, though, leaving them in second place in the section, two points ahead of Spain. Worthington, who only replaced the departed Lawrie Sanchez in June, will be full of confidence before two away qualifiers against Latvia and Iceland next month.