Published: Saturday 24 March 2007, 23.51CET
Poland 5-0 Azerbaijan Two goals inside the opening six minutes eased Poland to a comfortable victory as well as to pole position in Group A. 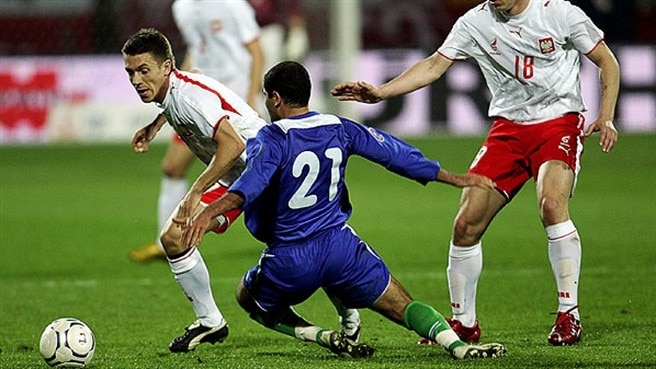 Poland 5-0 Azerbaijan Two goals inside the opening six minutes eased Poland to a comfortable victory as well as to pole position in Group A.
Read more

Poland climbed to the top of Group A after strolling to a comfortable victory against Azerbaijan at the Wojska Polskiego stadium in Warsaw.

Early goals
Kazakhstan's surprise defeat of Serbia earlier in the day had presented Poland with the chance to move clear in pole position, and they took full advantage, effectively sealing the win within the first six minutes when they jumped into a 2-0 lead. Jacek Bąk was first on the scoresheet, rising unmarked to head in Wojciech Łobodziński's free-kick after only three minutes. The celebrations had barely died down when the home side added the second. Again the goal came from a free-kick, this time played to the byline where Marcin Wasilewski pulled the ball back for Dariusz Dudka to nod in.

Lewandowski miss
Azerbaijan offered little attacking threat and almost fell further behind when Mariusz Lewandowski pulled a shot narrowly wide on 26 minutes. Another goal was not long in coming, though, as again Poland exploited weaknesses in the centre of the Azerbaijan defence. This time Lukasz Gargula picked out Łobodziński, who headed past Jahangir Hasanzade from ten metres. Hasanzade did prevent Poland from stretching their advantage moments later when he tipped Michał Żewłakow's dipping set-piece over the bar, but the points already looked safe for the hosts who went into half-time three goals to the good.

Krzynówek fourth
There was little let-up after the break and Jacek Krzynówek tapped in the fourth from close range on 58 minutes before substitute Przemysław Kaźmierczak rounded off the scoring with another headed goal six minutes from time. It was Poland's fourth win in succession and takes them two points clear of second-placed Finland with an opportunity to extend that lead when they host Armenia on Wednesday. Azerbaijan, still seeking their first victory of the campaign, are at home to Finland next.