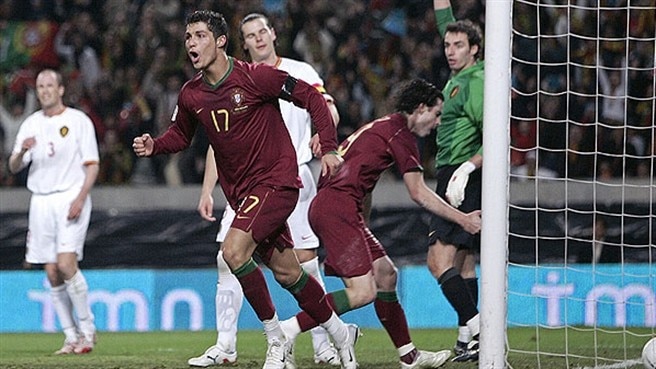 Portugal maintained their 100 per cent home record in UEFA EURO 2008™ qualifying with a hugely convincing 4-0 victory over Belgium at Lisbon's José Alvalade stadium.

Second-half blitz
After a first half where they failed to translate their vast superiority into goals, Luiz Felipe Scolari's side made amends as second-half strikes from Nuno Gomes, Cristiano Ronaldo (2) and Ricardo Quaresma secured a third straight home success in Group A. Now up to third in the section, they will hope to climb even higher when they visit Serbia on Wednesday.

Portugal possession
From the fourth minute, when the skilful Quaresma swerved an effort wide, it seemed a matter of when, rather than if, Portugal would make the breakthrough. The same player then shot wastefully over after Tiago played him through on 13 minutes, but with Belgium struggling to keep the ball, further chances followed. Ronaldo alone went close three times in a first half when Portugal enjoyed 69 per cent of possession.

Breakthrough
Nuno Gomes squandered a glorious opportunity to open the second period with a goal, placing a left-foot volley wide after Tiago's lofted ball had found him unmarked. The striker made no mistake on 53 minutes, though, when he tapped in after fine work by Ronaldo and João Moutinho, and three minutes later it was 2-0 as Ronaldo headed in at the far post from Quaresma's superb chip. If Belgium retained any faint hopes, these vanished altogether when debutant Thomas Chatelle missed an open goal with his first touch.

Quaresma cracker
Quaresma registered the goal of the night in the 69th minute with a superb first international strike, bending the ball over Stijn Stijnen and into the far corner with the outside of his right boot. The Belgium keeper then denied Tiago and Nani, yet was beaten a final time on 75 minutes when Ronaldo shimmied inside his marker and directed a low effort into the net from the edge of the box. On this evidence Portugal can travel to Serbia full of confidence; Belgium, on the contrary, have plenty to do before their next qualifier – at home to the Portuguese on 2 June.