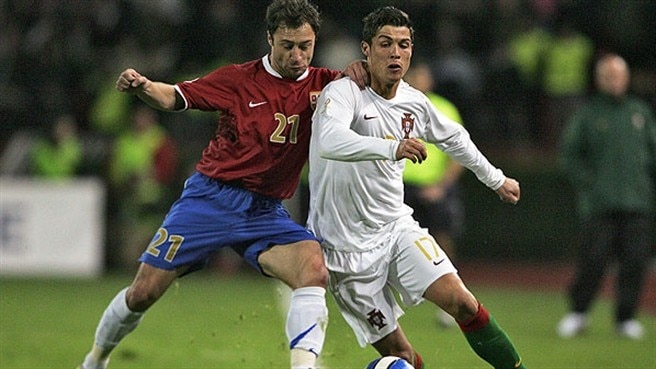 Serbia 1-1 Portugal Boško Janković's equaliser ensured the points were shared between the teams chasing Poland in Group A.
Read more

Portugal and Serbia maintained their pursuit of UEFA EURO 2008™ Group A leaders Poland with a hard-fought draw in Belgrade.

Tiago opener
Tiago put the visitors ahead inside five minutes but Boško Janković's equaliser eight minutes before the interval was enough to leave both sides on eleven points from six matches, five behind the Poles who have played a game more.

Confident swagger
The Portuguese, who routed Belgium 4-0 on Saturday, started with the swagger of a team full of confidence and that was best demonstrated by Tiago's stunning opener - the Olympique Lyonnais midfielder cleverly lobbing home goalkeeper Vladimir Stojković from 33 metres. Serbia gradually came into the tie, although Portugal were always dangerous on the break and Petit almost made it 2-0 with a drilled effort that flew over.

Physical presence
It took 18 minutes for Serbia to test Portugal No1 Ricardo, who kept out Duško Tošić's ten-metre strike, but Portugal again ought to have doubled their advantage when Nuno Gomes headed Simão's corner over from five metres. At the other end, Nemanja Vidić's physical presence was causing the Portugal defence problems and the Manchester United FC defender nodded wide from close range shortly before the half-hour.

Janković header
The hosts dragged themselves level, though, when Dejan Stanković's corner was headed home by Janković eight minutes before the break. Nuno Gomes almost replied instantly yet his attempt flashed wide. Winger Cristiano Ronaldo then came close to getting on the scoresheet only for his shot to be superbly blocked by Igor Duljal on the stroke of half-time. Portugal resumed the second half in control with João Moutinho's strike demanding a fantastic save from Stojković. The latter excelled again on 64 minutes to frustrate Tiago, before the keeper completed a fine individual display by repelling Ronaldo's powerful free-kick late on.