Published: Saturday 2 June 2007, 23.45CET
Azerbaijan 1-3 Poland Jacek Krzynówek scored twice and made another as the Group A leaders came from behind to win in Baku. 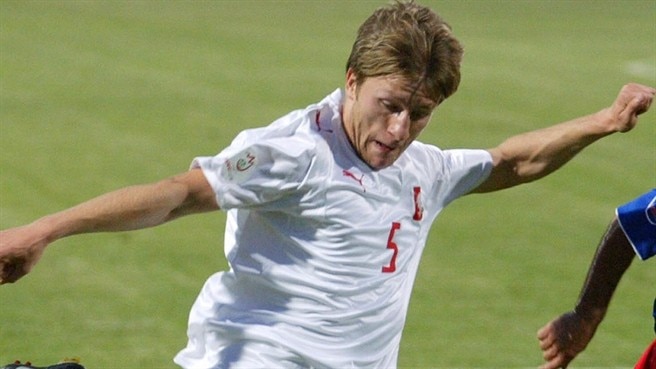 Action from the encounter in Baku ©Getty Images

Azerbaijan 1-3 Poland Jacek Krzynówek scored twice and made another as the Group A leaders came from behind to win in Baku.
Read more

Jacek Krzynówek scored two goals and made another as Group A leaders Poland came from behind in Azerbaijan to clinch their sixth consecutive victory. An upset appeared on the cards when Branimir Subašić gave the home side an early lead but two goals in the space of three second-half minutes and another late on swung the contest in favour of Leo Beenhakker's men.

Perfect start
Azerbaijan had been hoping to trigger a winning sequence of their own after edging past Finland last time out, and they made the perfect start when Subašić scored after six minutes. Leaving Dariusz Dudka in his wake, the PFC Neftchi forward cut in from the left and showed great awareness to beat Artur Boruc at his near post as the Celtic FC goalkeeper edged off his line.

Resolute defending
It nearly got better for Shahin Diniyev's team on 12 minutes but Khagani Mamedov failed to squeeze the ball past Boruc following another defensive lapse. Poland had not dropped points since October but they struggled to break down a resolute home defence in the first period, Jakub Błaszczykowski missing the best opportunity on 40 minutes when he was denied by goalkeeper Farkhad Veliyev after racing clear.

Aggressive approach
Krzynówek's fizzing shot wide on 52 minutes was evidence of Poland's more aggressive approach after the break, and they were rewarded on 63 minutes, Euzebiusz Smolarek heading in Krzynówek's right-wing free-kick from close range for his fourth goal of the campaign. To the home fans' dismay, Poland were in front three minutes later as the influential Krzynówek drilled in after Azerbaijan had failed to deal with a cross.

Venomous shot
Poland seized control of the game's closing stages, with Smolarek heading against an upright before Krzynówek scored his second of the night, jinking on to his right foot and rifling a venomous shot past Veliyev. The victory sees Poland consolidate their position on 19 points at the top of the section ahead of Wednesday’s trip to Armenia, while last-placed Azerbaijan will hope to bounce back in Kazakhstan.