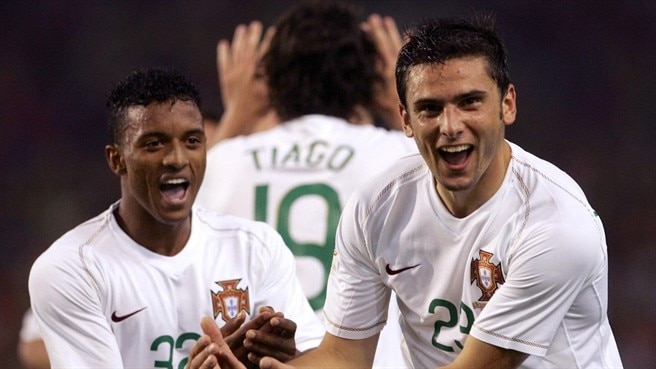 Hélder Postiga scored a sumptuous long-range winner as Portugal kept the pressure on Group A leaders Poland with a hard-fought 2-1 victory away to Belgium in Brussels.

Lively wingers
Frustrated for much of the encounter, the FC Porto striker produced a memorable swerving effort past the excellent Stijn Stijnen to set the visitors on course for a victory that seemed inevitable for much of the first half. With Cristiano Ronaldo absent, the Belgian defenders may have imagined an easier night to that which ended in a 4-0 defeat when the sides met in March, but Nani and Deco soon banished such thoughts as Luiz Felipe Scolari's team enjoyed an impressive start.

Stijnen busied
Deco soon forced Stijnen into action with a near-post strike, though the goalkeeper should not have been given a chance on eleven minutes when Nani's beautifully-weighted cross found Hélder Postiga in space. Yet with the goal at his mercy, the forward headed straight at Stijnen and Nani began to take matters into his own hands. He twice rifled efforts just wide before finally hitting his second international goal two minutes before half-time, weaving into the penalty area and unleashing a low drive to which Stijnen got the faintest of touches as it went in off the upright.

Late red card
It looked to have provided a platform from which Portugal could build but Belgium had other ideas. Only the excellent reactions of Ricardo denied François Sterchele immediately after the restart and it set the tone for a vibrant spell for the home team, who equalised on 55 minutes when Steven Defour's cross was headed in by Marouane Fellaini. It was the youngster's first international goal but Hélder Postiga's solo effort ensured the points went to Portugal, though Hugo Almeida's late dismissal took away some of the gloss.