Armenia bring Poland down to earth 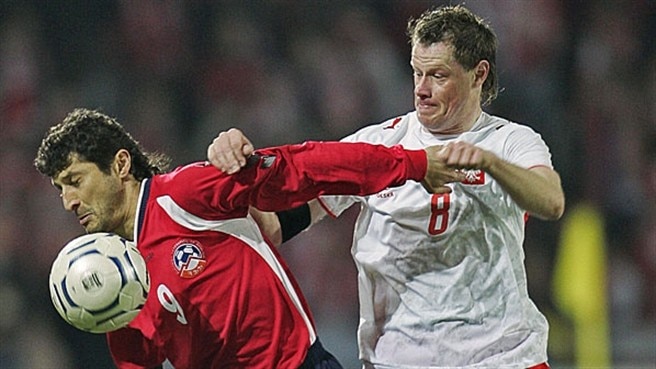 Armenia bring Poland down to earth

Poland's hopes of reaching their first UEFA European Championship finals received an unexpected blow as they suffered a 1-0 defeat in Armenia.

Memorable week
The Group A leaders went into the game seeking a seventh successive victory yet they were far from their best against Ian Porterfield's side and could find no answer to Hamlet Mkhitaryan's second-half free-kick. For Armenia and their jubilant fans, it completed a memorable week following their first win in the section last Saturday, 2-1 in Kazakhstan.

Missed chances
After a slow start at the Republican stadium, the match came to life with a flurry of chances midway through the first half. After Armenia's Robert Arzumanyan had headed past the far post from a corner, Poland responded and Marek Saganowski was the first to force Gevorg Kasparov into action, the home keeper saving well as Saganowski slid in to connect with a low cross. Soon afterwards Kasparov had to tip over Jacek Krzynówek's free-kick and on the half-hour the pressure nearly brought a goal. Wojciech Łobodziński drove in a shot and when Kasparov could only parry the ball, Saganowski turned the rebound wide of a gaping goal.

Mkhitaryan strikes
Although Łobodziński flashed an attempt across goal on 57 minutes, Leo Beenhakker's team were not controlling proceedings as expected and the game slipped away from them when the breakthrough came on 66 minutes. Following Jacek Bąk's foul on Aram Hakobyan some 20 metres from goal, Mkhitaryan curled his free-kick over the Poland wall and beyond the despairing right arm of Artur Boruc.

Plenty to ponder
Poland substitutes Jakub Błaszczykowski and Maciej Żurawski both had efforts beaten away by Kasparov, yet the defeat might have been even more embarrassing had Arman Karamyan not spurned a clear opportunity in added time. Rather than going into the summer with an eight-point lead, Poland's result leaves them looking suddenly vulnerable given their immediate pursuers in Group A, Portugal and Serbia, both have two games in hand – and Poland must still visit that pair when qualifying resumes in the autumn.