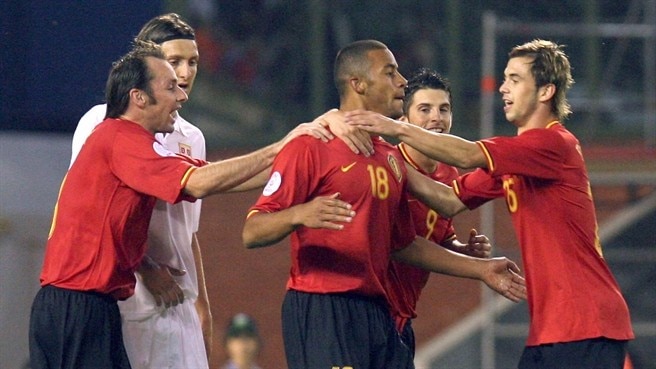 Belgium kept alive their slim hopes of qualifying for UEFA EURO 2008™ from Group A by denting Serbia's own aspirations in Brussels.

Dembélé double
Goals from Moussa Dembélé and debutant Kevin Mirallas, a star of the summer's UEFA European Under-21 Championship, inside the opening half-hour gave the hosts a two-goal lead but Zdravko Kuzmanović's 73rd-minute strike halved the deficit. Dembélé restored the cushion with two minutes remaining before Kuzmanović set up a thrilling finish.

Early opener
Serbia started the brighter with Boško Janković, another to shine at the U21 finals, firing wide and Kuzmanović forcing a save from Stijn Stijnen before Belgium opened the scoring in the tenth minute. Steven Defour sent in a cross from the right and Dembélé slotted the ball in from 12 metres for his second international goal.

Deserved second
Dembélé came close to doubling his tally four minutes later but his shot was saved by Vladimir Stojković before Thomas Vermaelen fired over the bar. In the 30th minute, Belgium got a deserved second goal as teenager Mirallas made it a debut to remember with a solo effort, beating Stojković with a shot into the far corner from the edge of the area.

Serbia reply
Miloš Krasić entered the fray early in the second half and his shot on the hour mark was blocked by Vermaelen. Belgium coach René Vandereycken replaced Mirallas with defender Anthony Vanden Borre soon after in an attempt to hold on to the lead, but Serbia pulled a goal back 17 minutes from time when Kuzmanović converted Ivica Dragutinović's cross from close range.

Tense finish
Dembélé's second goal, which beat Stojković at his near post from close range, looked to have put the game to rest but Kuzmanović's second in added time from 12 metres made it a tense final few minutes. Serbia have fallen three points behind second-placed Finland, who trail leaders Poland by two points, while Belgium are four points further back of the second qualifying position.